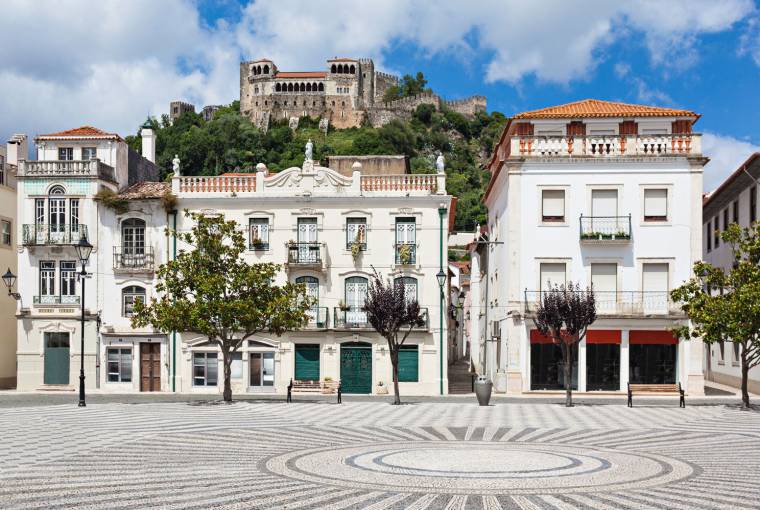 In the Beiras regions, all roads seem to lead to Leiria from surrounding tourist favourites such as Coimbra, Alcobaça, Fatima and Batalha, with its outstanding monastery. However, beyond being the geographical hub, Leiria has its own charms. Built on the hills and flatlands that flank the River Lis, its old quarter and ancient monuments make it a worthy visit, even if the more modern sections are quite industrial. Furthermore, the wealth of artisan products found throughout the surrounding countryside make Leiria a centre for such wares.

Leiria Castle is the towns focus point, standing proud on the hill rising out of this graceful town. Rebuilt numerous times following Moorish attack, in times which saw this town mark the southern limits of the medieval Portuguese Kingdom, the well restored remains were mainly built in the 14th century as a summer residence for Dom Dinis and Queen Isabel of Aragon. Later King João I would add the Gothic features also seen today. Dom Dinis, the poet king, is further credited with the planting of the vast expanses of pine forest which blanket the surrounding area, known as the Pinhal do Rei. His motivation was twofold: to control the sands which moved evermore inland and to provide quality timber for the building of ships. These ships would in due course undertake the perilous journeys of discovery for which Portugal is famous.

In the much-loved cobbled centre of the town, arcaded buildings and archways share the streets with a 12th century church of São Pedro and a Cathedral which houses the local archaeological museum and some 17th century artwork around the altar. These ancient streets, and their central Rodrigues Lobo square, also house numerous shops selling the crafts for which the local area is famed, particularly glasswork. Factories in nearby Marinha Grande have been producing traditionally made crystal-ware for centuries and it remains one of Portugal’s main and most prestigious manufacturers of its kind.

The nearby coast boasts typical Atlantic surf and sandy beaches, the most popular resort being São Pedro de Moel. This small cliffside town has its own ramparts and ancient quarter besides all the modern trapping of a holiday resort.