Perched on a hill rising out of an agricultural plain, Óbidos is one of Portugal’s picturesque gems. From its lofty centre one gazes upon expanses of vineyards speckled with whirling windmills and terracotta-roofed homesteads. Nearer, narrow cobbled streets, lined typically with whitewashed, bougainvillaea-draped houses, wind up to the walled interior; the name Óbidos stems from the Latin for citadel. 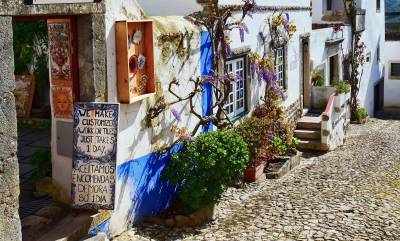 First remarked upon for its beauty by the 13th century Queen Isabel de Aragon, Óbidos was presented to her as a gift by her romantically inclined husband King Dinis and thenceforth it has been offered by princes to their brides.

The Manueline style castle crowns the town and now houses guests in its luxurious rooms. In past times, however, this was a formidable medieval fortification. It was won back from the Moors in 1148 by the king and his men, apparently disguised as cherry trees, and lovingly restored after extensive damage in the 1755 earthquake. Equally interesting history is attached to the renaissance church, the Igreja de Santa Maria, where Prince Afonso V married his cousin aged ten and eight respectively. Here 17th century tiles adorn the walls which house a handsome example of renaissance tombs and paintings by the artist Josefa d’Óbidos. 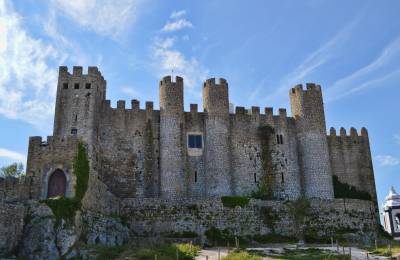 The ramparts are traversed through an ornately tiled gateway and few vehicles bother negotiating the ancient streets, making it ideal for mooching around the higgledy-piggledy houses and walkways, which in spring come alive with a cascading array of brightly coloured flowers. Local crafts, delicacies and liqueurs abound in the traditional shops which line the main street, including the famed local tipple Ginginha, a sweet brandy liqueur made with local cherries.

Although inland, nearby is the large lagoon Lagoa de Óbidos where you can swim, sunbathe or even hire windsurfing equipment, however now much further away lie the beaches around Peniche famous for their various surfing waves. Golfers would have to travel to nearby Torres Vedras for the nearest 9-hole course.