The small town of Vila Nova de Milfontes is the most popular resort on the Alentejo coast. Positioned on the sheltered waters of the Rio Mira estuary the town is only a stone's throw from the Atlantic coast and any number of outstanding beaches.

Although the town has expanded over the years to cater for the increasing number of visitors the old centre still retains much of its charm. A jumble of whitewashed houses line narrow streets all of which lead down to the riverside and the old ivy-clad Forte de São Clemente. This curious little castle was built in 1599 to defend the town from the Barbary pirates of North Africa. It served as a hotel for many years but is now privately owned and closed to the public.

Whilst there is still a busy little fishing fleet operating from this sheltered rivermouth the economy of V.N. de Milfontes is now very much about tourism. In the peak summer months the population here swells dramatically to upward of 50,000. The vast majority of these visitors are Portuguese families which makes for a very different vibe to similar sized resorts in the Algarve. As such the town caters for the home crowd so you might be disappointed if you were looking for the ubiquitous Irish pub or all-day full English breakfast! That said, as is true of most of Portugal, the standard of English spoken by those working in hospitality is generally good. 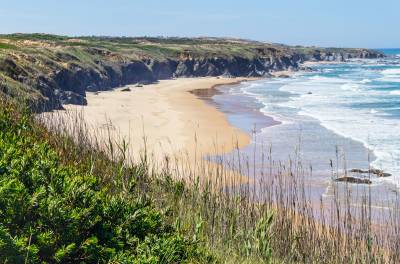 Out of season (and we are only talking about a couple of weeks either side of the summer holidays) Vila Nova de Milfontes is dramatically queiter, and well known for its laid back atmosphere. This time of year there tend to be a more diverse bunch of tourists visiting the area - older and from around Europe. However, the visitors are still drawn here for the same reasons number one of which are the fantastic beaches and unspoilt coast.

Vila Nova de Milfontes is home to a number of beaches which are within walking distance. The closest of these is the riverside Praia da Franquia which is generally regarded as a safe, calm family beach. To a large extent this is true although there can be strong river currents here so heed the lifeguard's advice. Beyond the rivermouth and across the dunes are further beaches but these are exposed to the often fierce waves of the Atlantic Ocean, which makes them ideal for surfing. The best surf spot nearby is Malhão, a few km to the north whilst the most highly regarded beach on this stretch of coast is said to be Almograve, a 20 minute drive to the south. 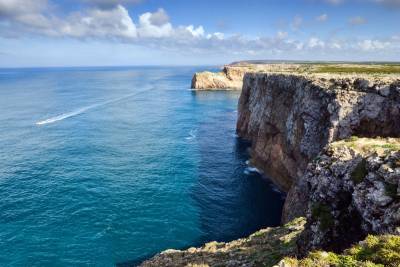 Despite its obvious attractions and popularity, the area surrounding Milfontes remains more or less pristine as it falls within the beautiful, and vast, Parque Natural do Sudoeste Alentejano e Costa Vicentina. This coastal park stretches for around 150 km (100 miles) along the Atlantic coast of the Alentejo and Algarve. Much of the landscape here is defined by high, rugged cliffs which occasionally give way to beautiful, wide golden sand beaches at spots such as Porto Covo, Almograve and, of course, Vila Nova de Milfontes.