The name of the region of which Bragança is the capital belies its nature, being that Tras-os-Montes, quite literally 'behind the mountains', is easily the most remote part of mainland Portugal, if not western Europe. Here, ancient stone houses still cluster in small villages that seem unaffected by the speed and complexities of modern life, rich traditional dishes still fill the bellies of hard-working farmers and the general feel is one of pleasing distance, both physical and other, from the busier, more cosmopolitan parts of the country. However, its sometimes wild climate and remoteness from infrastructure and trade centres has translated itself into much emigration from this beautiful, rugged but isolated region.

Bragança, the town, stands proudly on a plateau only a matter of a few kilometres away from the Spanish border. Known in Celtic times as Brigantia and by the Romans as Juliobriga, its hilltop location has appealed to many a defending population and it was the royal seat of the Dukes of Bragança until the dissolution of the monarchy in 1910, indeed the royal consort of English King Charles II, Catherine of Bragança, hailed from here. 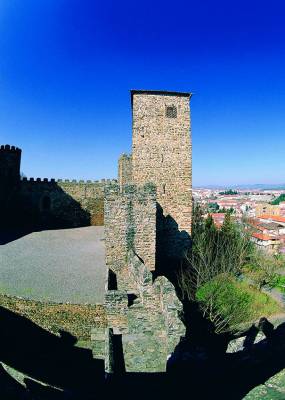 The walls and castle which still stand date from the 12th century and boast a 33metre keep and various watchtowers. In its gardens, a stone boar is said to date from the Iron Age, whereas the pillory which rises from its back probably dates from the 1500s, and in the keep, the Museu Militar displays a motley collection of bellic artefacts, from medieval armour, to 20th century guns and even art collected by Portuguese soldiers whilst serving in the then colonies. The town is also home to Portugal’s last remaining example of Romanesque civic architecture, the pentagonal Domus Municipalis, with many small arches on each of its sides, crowns the citadel. The local museum takes its name from a famous son of Bragança, a scholar and historian by the name of Abade de Baçal, whose vast knowledge of his region and its past was published and greatly revered. The museum displays, amongst many other curios, art dating from the 1500s, age-old gravestones and instruments of torture. The interior of the church of Santa Maria is also worth a visit with a strikingly vivid depiction of the Assumption on its barrel-shaped ceiling

All Portuguese towns have their repertoire of stories and legends, and Bragança is no exception. A highlight in one of Portugal’s most-loved tragic love stories reputedly took place in a church here. Dom Pedro I is said to have married his forbidden love Inês de Castro in the 13th century church of São Vicente. Furthermore, a tower known as the Torre da Princesa is said to have held the captive Queen Leonor, deemed too beautiful for the public gaze by her jealous husband, the then Duke of Bragança.

Also occupying the rugged hills of Tras-os-Montes is the vast expanse of the Parque Natural de Montesinho, locally nicknamed Terra Fria, or 'cold land'. Here various wild animals, such as boars, wolves and otters, live amongst its ancient oaks and thicket. You also stumble across villages with a distinctly medieval feel to them and, as recently as the mid 20th century, pre-Christian rituals were not unheard of among the sparse population of these simple settlements. Eagles soar and winds sweep across the more barren mountain slopes, and spring sees a flourish of white almond blossoms. Trekkers delight in this wilderness, though the ancient pathways are often hard to distinguish, and maps available from the tourist office come recommended.

Villages of note include Vinhais, Vila Flor, Chacim and Freixo de Espada à Cinta. The last name apparently might originate from a story of King Dinis attaching his sword to a local tree, since it means 'ash with belted sword'. Its church is what could be described as a mini Mosteiro dos Jerónimos, due to its ornately carved Manueline stonework. Vinhais looks out over the natural park and boasts beautiful old-fashioned dovecotes. Chacim is home to another intriguing tale, this time one of successful rebellion against the dominant classes and the local tradition of the feudal lord ‘breaking in’ the bride on her wedding night. Vila Flor is another castled town, but is also situated near to one of the Spas of this area, the Aguas Bem Saude. Another is the Caldas de Abelheira, near Chacim. The valley of the Vale de Cõa, near Torre de Moncorvo, contains the largest collection of open-air drawings from the Stone Age discovered anywhere in the world.