Although a small town, Tomar plays a large role in a very important stage of Portuguese history, with links to the Knights Templar and the Discoveries, and remains an attractive and interesting place to visit. 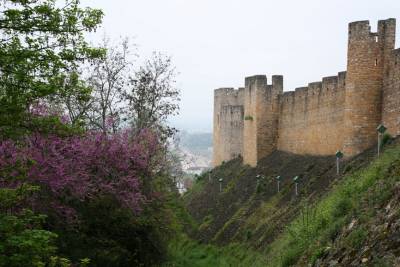 Its story begins in the eleven hundreds when much land in the area was donated to the Knights of the Temple of Jerusalem by the then Queen Dona Teresa and her son Dom Alfonso Henriques. Upon this land the Master of the Order of the Temple, Gualdim Pais, instigated the building of a castle which would continue to grow in size and grandeur throughout the ages until the 17th century. Legend tells us that the position of the castle, and indeed its name, came to the Templars in a vision upon their arrival in the area.

The castle and the Knights of the Order served to defend the centre of Portugal from attack and invasion, and often they were besieged, but by the 14th century there was a movement throughout Europe to ban the Templars and so came about the extinction of the Order. However, they continued to be supported by the Portuguese royals and so in 1319 Dom Dinis eventually succeeded in negotiating with the Catholic powers the establishment of the new Order of Christ, which would basically take over from where the Templars left off, with the same people, property and privileges. It was this Order which worked alongside Henry the Navigator in the 15th century and whose knowledge and financial backing aided his voyages of discovery. The knights became explorers in their own right with a remit to extend Portuguese influence in the world and to spread Christianity to these new lands.

These voyages and discoveries over the ages are represented in the enormous variety of architectural styles which adorn the castle and convent.