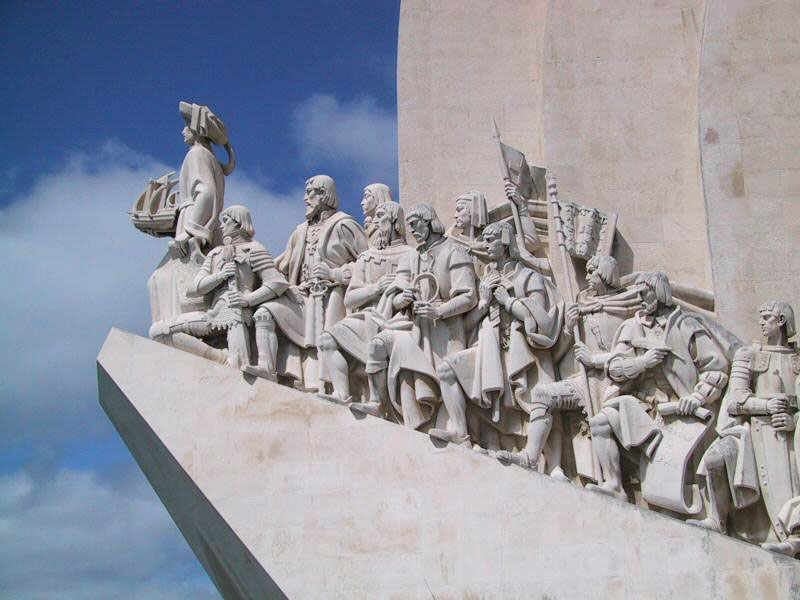 Beautiful, culturally resplendent and immensely significant in Portuguese history, Belém is one of the jewels in Lisbon’s crown. In terms of places to visit and sights to see, this elegant area of the city probably holds the record. Situated alongside the River Tagus, at the point where it meets the Atlantic, Belém is the place from which the caravels sailed on their voyage of discovery and in the 16th century life here revolved around the port. Nowadays it is an area of leisure and recreation where historical monuments lie cheek and jowl with modern museums, contemporary art exhibitions and busy cafes.

The momentous occasion of the discoveries is celebrated in the Monument to the Discoveries, erected in 1960 on the 500th anniversary of the death of Henry the Navigator, the instigator of the Portuguese adventures into the unknown. This towering, white monument is shaped like one of the famous caravels and points out to sea, its giant stone-carved crew prominent characters from Portuguese history such as the poet Camões, the navigators Vasco da Gama and Magalhães, kings Alfonso V and Manuel I, and at its prow Henry the Navigator himself.

Further along the riverbank is the Torre de Belém (Tower of Belém). This ornate and distinctively shaped tower was originally designed in 1514 as a formidable fortress and key to the defence of the estuary mouth. As the bank has pushed out towards it over the years it has become less of an island defence but its unique beauty has earned it UNESCO world heritage status and the reputation for being one of the beguiling examples of military architecture the world over. The stonework of the exterior is the major attraction with ornate balconies, Manueline rope shapes, animals and shields. Each corner boasts a sentry post with evident Moorish style and from the inside panoramic views of the river and much of the city can be gained. 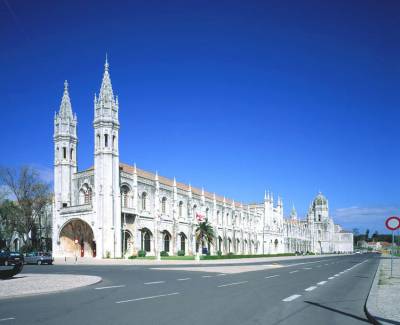 Also honoured bearer of UNESCO world heritage status is the magnificent and immense 16th century Hieronymite Monastery. Taking almost 100 years to build, the colossal size and ornate decoration of the Mosteiro dos Jerónimos reflect the prosperity of the Portuguese kingdom and empire at that time, and it was created to honour the brave navigators who helped bring Portugal to that desirable status in the world. Again principally Manueline in style, it contains some charming cloisters, impressive statues and much masterfully carved stonework. Two of the most famous Portuguese sons are also entombed here. Vasco da Gama, the first voyager to India, and Luís de Camões, who captured the feats of the Portuguese explorers in his epic poem Os Lusíadas.

On a more modern tip, the striking Cultural Centre of Belém (CCB), built for Portugal’s presidency of the EU in 1992, hosts many cultural events and shows including international art exhibitions, world famous music and theatre and congresses. It has an impressive permanent exhibition of design, an extensive bookshop, various culturally inspired boutiques and the restaurant terrace looks out over the river. 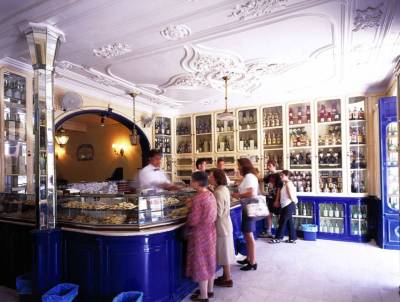 No trip to Belém would be complete without sampling the delectable Pasteis de Belém – warm custard tarts with a light crunchy casing, served in old-fashioned tiled rooms dating back to the mid 1800s. The recipe remains a secret and they are famous the world over and enjoyed by the people of Lisbon who often make this beautiful café a part of their Sunday outing.

Also in this Belém are some lovely green areas and tailored gardens enjoyed by strollers, teenagers, children and visitors alike as well as lush tropical gardens and Lisbon’s Electricity Museum, which is housed in an old redbrick power station architecturally distinct from most other buildings in the city. The Ajuda Palace offers another fine example of the splendour of the 18th century in Portugal and the Coach Museum nearby has the world’s finest collection of royal horse-drawn carriages