The beach of Praia das Furnas sits across the river Mira from Vila Nova de Milfontes. It could be considered two distinct beaches as it wraps around the coast with one side facing into the calm waters of the Mira estuary and the other into the powerful waves of the Atlantic.

Furnas beach is something of a haven from the crowds that inundate Vila Nova de Milfontes in the summer. Although it is just a quick ferry trip across the water or 10 minute drive from the little resort town it is always far less crowded than Praia da Franquia on the other side. It is worth noting the ferry (which costs around €3 return) only operates during the summer and runs every hour.

Besides the lack of summer crowds the more popular sheltered side of Furnas is fairly similar to the town's river beach and a favourite with families. Whilst the water is clean (2014 Blue Flag award) and calm there can be strong tidal currents here so care must be taken and only swim in the designated areas. There is a lifeguard service here during the summer.

Head around the corner to the Atlantic coast and the character of the beach changes. There is initially a wide expanse of powdery golden sand before the beach becomes broken up into a series of small coves by the cliffs to the south. This ocean facing section of beach is popular with surfers and bodyboarders but is also a great spot for just hanging out on this unspoilt stretch of sand.

Other beaches near Praia das Furnas 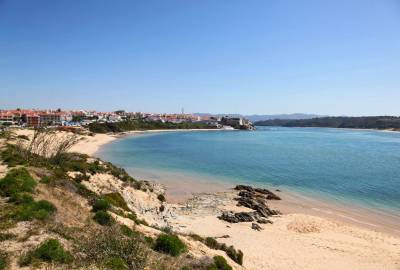 The small town of Vila Nova de Milfontes is the most popular resort on the Alentejo coast. Positioned on the sheltered waters of the Rio Mira estuary the town is only a stone's throw from the Atlantic coast and any number of...