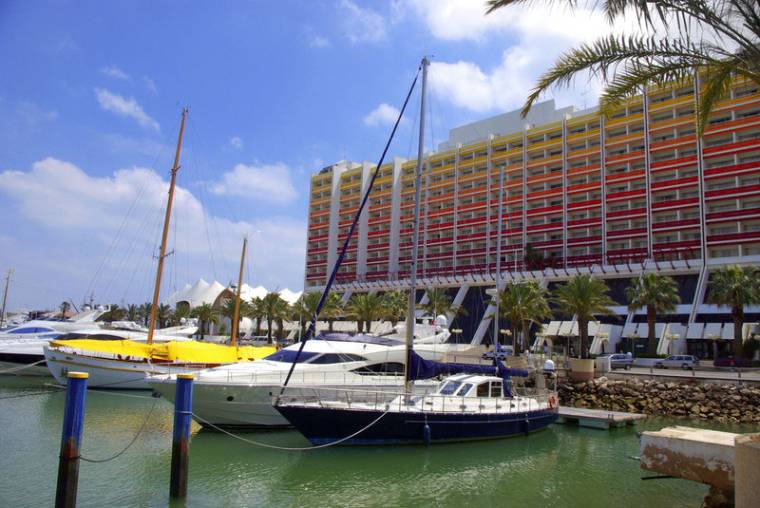 Vilamoura is more of an area than a town in itself and has grown over the past couple of decades to more or less engulf Quarteira to the east. Located virtually in the middle of the Algarve coast, within 15Km of the main airport at Faro, Vilamoura's accessibility has helped it become one of Europe's largest beach resorts. The 20 square Km of purpose built resort are home to practically every form of sport, entertainment and amenity imaginable. Combined with wide, well laid out roads, manicured gardens and public spaces and 6 golf courses Vilamoura is without doubt a world class holiday destination. 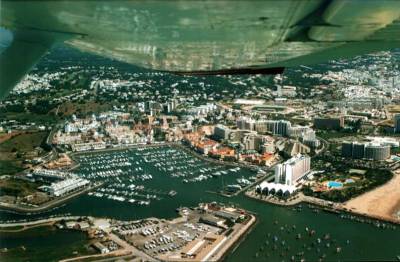 Vilamoura Marina from the Air

The town is built around the upmarket, 1,200 berth Vilamoura Marina which was constructed with private money in the 1970s. Facilities are extensive and the marina caters for the whole spectrum of boats from small speed boats through to 40+ metre yachts. The harbourside is the in place for the yachting set and is home to a number of smart, chic bars, restaurants and hotels. As you would expect prices are also somewhat higher than they are a little further inland.

There are plenty of excursions and boat trips going from the Marina with coastal trips to Lagos and dolphin watching trips. There are also opportunities for big game fishing with large marlin often being hooked. The area is also a haven for watersports such as parasailing, water-skiing, scuba diving and jet skiing. 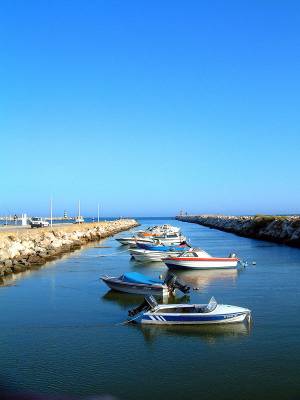 Vilamoura's golf course are the resorts other big attraction. The best known of the 6 or so golf courses are Millenium, Laguna, Pinhal, Victoria and the Old Course all of which are world class.

Vilamoura is home to Portugal's biggest and perhaps best known nightclub - Kadoc. Located on the Vilamoura - Albufeira road, Kadoc regularly features big name DJs fom all over Europe and has a capacity of around 7,000 clubbers. Other Vilamoura nightlife highlights include the bars and cafes around the Marina, in particular Portuguese football star Luis Figo's Cafe Sete (Sete being 7, Figo's number). There is also the fairly large Vilamoura casino with around 20 tables and over 500 machines. 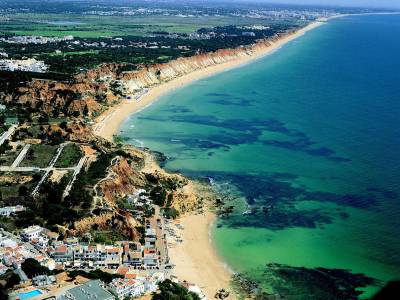 Praia da Falésia from above

Of course Vilamoura also has a good selection of fine sandy beaches. The most easily accessible of these is Praia da Marina (Marina beach) which has every facility imaginable and is worthy of its Blue Flag award. Located just east of the Marina, Praia da Marina stretches to Quarteira and has the backdrop of big luxury hotels one expects of a major resort. The resort’s other beach is the huge Praia da Falésia (cliff beach) on the western side of the marina. Falésia beach stretches all the way to Olhos de Agua 8Km away. The name comes from the red cliffs that the beach backs onto. These cliffs form a good natural windbreak from northerly winds. Again Falésia is a Blue Flag beach so expect excellent amenities and water quality.

Despite the name translating to ‘Moorish Town’, in terms of history there is very little to see in Vilamoura, hardly surprising as it has only really existed for about 30 years. That said there is the Museu Cerra da Vila museum based on an archeological site unearthed during the construction of the marina. Mainly consisting of Roman remains including baths, a mosaic and the foundations of some villas, there are also Visigoth and Moorish traces.