The beach of Praia de Albandeira lies roughly midway between the resorts of Carvoeiro and Armação de Pêra. It is set in a part of the Algarve coast that is home to many little coves and bays etched into the yellow limestone cliffs. All these beaches are home to the same crystal-clear water, golden sand and wonderful (and sometimes weird) rock formations.However, each beach has its own character too. As a bonus, despite being located between resorts, much of this coast has not suffered from any development.

What makes the beach at Albandeira stand out amongst many of its neighbours is just the right size, access is fairly easy and, just as important, it has small beach cafe - "Bar O Pirata". Also the rock formations here are quite interesting; to one side of the beach the cliff face has a large concave, cave-like section at the base, while just around the headland is the iconic Arco de Albandeira. This huge arched rock formation may seem familiar has it has appeared in countless Algarve holiday brochures.

Praia de Albandeira is a great spot for explorers of all ages. For kids there are lots of little nooks, crannies and pools to investigate along with relatively safe paddling. For the grown ups this is good snorkelling territory and if you have the means then it is well worth exploring some of the neighbouring inaccessible little coves. At low tide it is possible to access some of these coves on foot across the sand.

Another way to explore this coast is on foot. There is a great footpath running from Praia de Marinha in one direction to Senhora de Rocha on the edge of Armação de Pêra in the other direction - a total distance of around 5 km.

Other beaches near Praia de Albandeira 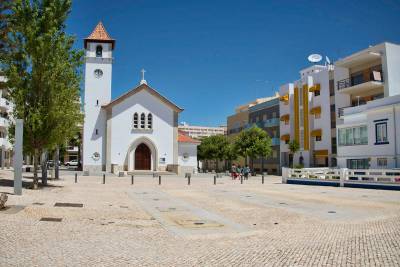