Sagres Weather and When to Go?

Being next to the most southwestern harbour in Europe, the laid-back, out-of-the way village of Sagres gets some amazing Atlantic swell and is becoming one of Portugal’s surfing and sailing hotspots. Although only 30 minutes away from Faro, the weather and sea temperatures here in summer are distinctly cooler, although winters here can be milder than other resorts on the Algarve. Summer sees very little rainfall, although visitors here wanting to relax by the sea will need to choose wisely; some of the resort’s beautiful beaches are breezier than others. The upside is that the stunning coastline around Sagres provides surfing opportunities for all ranges of ability and expertise. 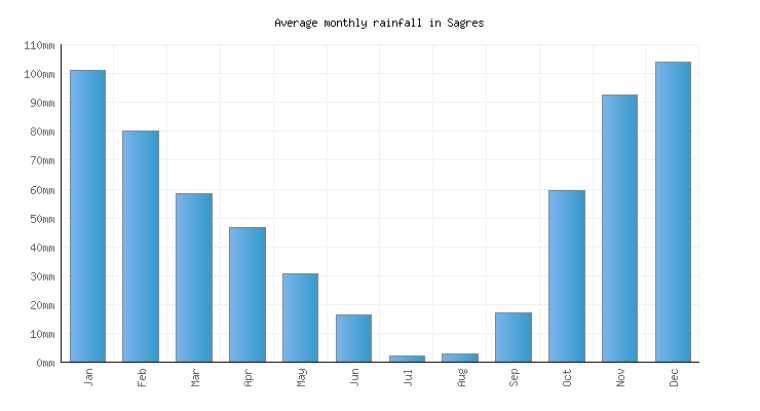 Springtime can be a good time to explore the region before the summer crowds descend on the Algarve.  Although the month of April is likely to see some rainy days, May and June can be good times to visit, with June usually experiencing only a couple of days of rainfall.  By June the sea temperature rises to around 20ᵒC (68ᵒF).  The month of May sees around 10 hours of sunshine daily.

July through to September see the warmest temperatures, with averages in the low/mid-20s ᵒC (low 70sᵒF). Rain is pretty rare during the summer months here and the milder day and night-time air temperatures here than those on other Algarve resorts make this a good summertime destination for those who prefer rugged coastal isolation and don’t like temperatures getting uncomfortably hot. Sea temperatures reach an average of 20ᵒC (68ᵒF) in June and July, rising to around 21ᵒC from August through to October, with the warmest sea temperature usually experienced in September. 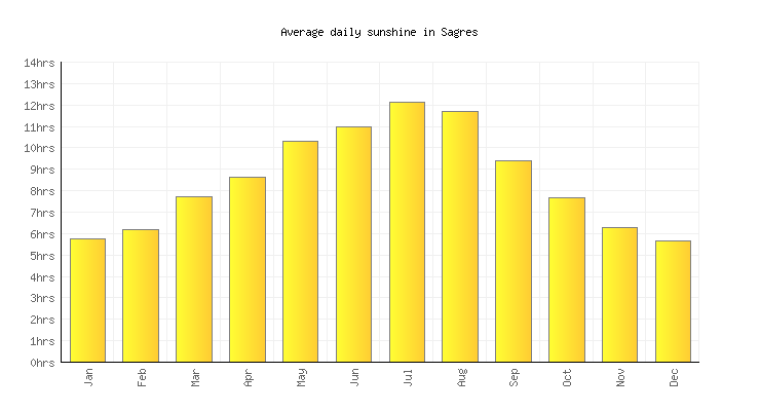 Although average air temperatures usually remain a mild 21ᵒC (68ᵒF) during September and October, dipping slightly lower in October, the months of October through to December can see some rainy, overcast  days, with average rainfall of 90mm during November.  However, early autumn can be a good time to make the most of good deals on airfares and hotels, and the sea remains pleasantly warm before it starts to cool at the end of October.

Most of the Algarve’s resorts are sheltered enough to be considered year-round destinations.  Sagres remains milder than northern Europe during the winter months, with average temperatures of between 14-16ᵒC (57-60ᵒF) in November and December, falling to around 13ᵒC (55ᵒF) in January and February.  November through to February can be affected by rainfall and in January through to March the sea temperature is unlikely to rise much above 16ᵒC (61ᵒF).