This extravagant mix of Late Gothic and Manueline architecture is rightly placed on UNESCO's World Heritage list. Built in the 14th century by King João I to celebrate victory in the battle of Aljubarrota the monastery houses both his and his son, Henry the Navigator's, tombs

The Mosteiro de Batalha (Battle Abbey) was built to celebrate the important military victory of the Battle of Aljubarrota of 1385 in which Spanish forces were driven back. And celebrate they did! To describe the monastery as impressive would be somewhat of an understatement. It is on a par with the Mosteiro dos Jerónimos in Belém for both the scale and style. Like Jerónimos, Batalha features many Manueline style flourishes, but at the core is one of the best examples of Gothic architecture in Portugal.

The monastery's official name is the Monastery of Saint Mary of the Victory (Mosteiro de Santa Maria da Vitória) and it was built on the promise of King João I. However, he never saw it finished and, in fact, construction spanned the reign of seven kings - from 1386 to 1517. Over these years the Portuguese empire grew and money appeared to be no object with each successive monarch lavishing funds on the project. The design of the monastery reflects the visions of several architects over the decades and the shift in emphasis from Gothic to Manueline.

Batalha was never actually finished. It seems that after nearly 150 years of construction the then king, João III, decided to concentrate on the Jerónimos Monastery in Lisbon. Whilst the monastery escaped the devastation of the 1755 earthquake it was badly damaged during the Peninsula War in 1810 when Napoleonic troops sacked the monastery. In the following years the building went into decline but restoration was initiated by King Fernando II in 1840. This continued almost as long as the original build and saw Batalha added as a UNESCO World Heritage site in 1983.

There are several distinct chapels and cloisters within the Batalha complex, each with its own style and features:

The Capela do Fundador (Founder's Chapel) is Portugal's royal pantheon. Designed by the architect Huguet it is a mixture of Gothic and English Perpendicular styles. The main feature is the tomb of King João I and his wife, Philippa of Lancaster. This consists of statues of the two lying in full sate dress, holding hands, apparently to symbolise the strong relations between Portugal and England.

The chapel also contains the tombs of their four sons, most notably Henry, who is perhaps better known as Henry the Navigator.

As Capelas Imperfeitas (The Unfinished Chapels) are perhaps the most impressive feature of the monastery. Commissioned by Dom Duarte, son of João I, this was intended to be a second royal mausoleum but as the name suggests it was never completed. Only Dom Duarte and his wife Eleanor of Aragon were ever interred here.

Situated to the rear of the main building, the chapels are only accessible through a separate (rather impressive) door. The main structure consists of a huge, 15 metre high octagonal rotunda with seven smaller, hexagonal chapels branching off it. Originally the design by Huguet was fairly austere, however his successor, Mateus Fernandes turned the chapels into a Manueline masterpiece. It was intended that the pillars and buttresses of the main rotunda would support a great dome. However, this never came to pass and this huge space was left without a roof.

The Chapterhouse (Sala do Capitulo) features an incredible star vaulted ceiling with spans of up to 19 metres. It is said that such was the risk in this feat of engineering that only condemned prisoners were permitted to work on it. The story also says that the architect, Huguet, slept under the ceiling the first night after the scaffolding was removed in order to silence the critics who said it was unsafe and impossible.

The Chapterhouse is also home to the Portuguese Tomb of the Unknown Soldier which holds the bodies of two soldiers from World War I.

The Royal Cloister (Claustro Real) are a celebration of Manueline frivolity somewhat reminiscent of those seen in the Mosteiro dos Jerónimos. It is a further example of the work of Mateus Fernandes which secured him a tomb within the monastery. The intricate carved decor of the arches and columns features motives such as spirals, flowers, pearls, shells and exotic vegetation.

Other attractions near Batalha Monastery 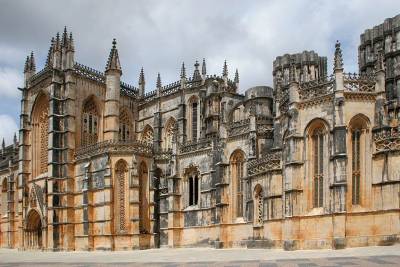 A small town amidst the hills of the Leiria area, Batalha only became a place of any significance upon the building of its magnificent monastery, now honoured with...