João (John) I of Portugal reigned from 1385 until his death in 1433, presiding over a period of stability and prosperity in the region for almost half a century. He was the founder of the Aviz dynasty.

Born the illegitimate son of King Dom Pedro I he was proclaimed leader in April 1385 and went on to defeat his Castilian rival for the throne at the Battle of Aljubarrota the following August. In 1387 he married Philippa of Lancaster, daughter of John of Gaunt cementing the union with the Treaty of Windsor, an Anglo/Portuguese alliance which still endures today. Border skirmishes with Castile continued until peace was finally established in 1411.  In 1415 Joao and his sons led the army which took the North African outpost of Ceuta, opening the way for Portugal’s future expansion into African territories. 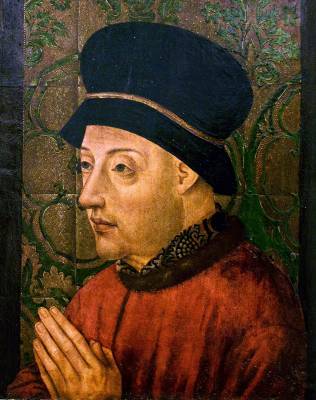 Joao is often referred to in Portugal as “João the Good” or even “João the Great” although in Spain he is more usually referred to as "João the Bastard".

Known for his love of hunting and learning, King João was said to have had a benevolent nature and a shrewd, intelligence.  Learning and culture thrived at his courts. He and his wife Philippa were thought to have had a happy marriage, by royal standards of the age and produced eight children, including Prince Henry the Navigator, the driving force behind Portugal’s 14th century age of maritime explorations and discoveries.  The House of Braganca, which reigned over Portugal from the 17th to 20th century, was descended from him, through his illegitimate son, Afonso (born before his marriage to Philippa).

A bronze statue of King Joao, astride his horse, can be seen in Lisbon’s Praca da Figueira.  He is buried, with his wife at his side, in the Monastery of Santa Maria da Batalha, the monastery founded by him to commemorate his victory at Aljubarrota.