Lamego's regional museum sits within the walls of the 18th century episcopal palace (bishop's palace) and contains some of the finest examples of religious art to be found anywhere in Portugal. Much of the collection was built up over the centuries by the Bishops of Lamego but since the episcopal palace became the museum there have been many new additions.

Among the highlights on exhibit are a number of religious paintings by Vasco Fernandes, or Grão Vasco as he was commonly known. The 16th century paintings were commissioned to form part of the altarpiece in the cathedral. Originally there were 20 panels, but today only 5 survive.

The other main attraction at Lamego's museum is the collection of Flemish tapestries which also date back to the Renaissance period. These stunning tapestries feature scenes from Greek mythology and religious themes such as 'Judgement in Paradise'.

Also of interest are the wonderfully ornate Baroque gilded wood chapel interiors that were rescued from the Chagas Convent. These wooden panels have been re-assembled to create the complete chapels within the museum.

Other attractions near Lamego Museum 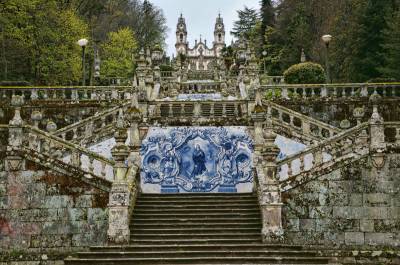