Separated from neighbouring Praia da Vau by a small headland at all but low tide the sheltered cove of the Praia do Alemão is an Algarvian delight. Also known as the Praia do Barranco das Canas the name Praia do Alemão (meaning German's beach) comes from the fact that the first house built here belonged to a German family.

This is a typical Algarve beach in the sense it is backed by ochre coloured cliffs, has fine golden sand and crystal clear azure water. This is a popular beach but can still be considered something of a get-away from the summer crowds at Praia da Rocha a kilometre along the coast..

Towards the western end of the beach are various rock formations and caves which provide no end of places to explore. From here the bay sweeps round to the headland of Ponta de João de Arens.

Other beaches near Praia do Alemão 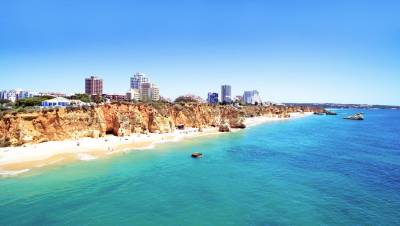