Figueira da Foz, just 40km west of Coimbra, is one of the liveliest towns on the west coast of Portugal. Situated where the Mondego River meets the Atlantic and sheltered by the mountains of the Serra da Boa Viagem this coastal settlement was a major deep-sea fishing port long before it became a popular tourist destination. Literally 'Fig Tree at the Mouth of the River', Figueira is home to Portugal's largest beach, a three kilometre stretch nick-named 'Rainha das Praias', the queen of beaches. This stretch is a long expanse of white sand, wide enough that it takes a good five minutes to reach the sea from the prom, which is lined with cafes and apartments. The spot nearest town, named 'Relogio' after the town clock, is a blue flag beach with disabled access, sports areas, fun fairs, children's parks and playgrounds and cycle tracks.

Possibly the nicest spot on Figueira's long beach is Buarcos, named after a traditional fishing village at the northern end of the bay, about two kilometres from the centre of town (regular buses run from the train station). Buarcos is considered a suburb of Figueira, although in character it is quite different. Many residents still work in the fishing industry, something that is reflected in the many seafood restaurants and bars that overlook the seafront. Attractive traditional fishermen's huts are slowly being surrounded by concrete high-rise developments but the town retains much of its charm and is undeniably a quieter alternative to Relogio. Buarcos is well-known among the surfing community for having one of the longest waves in Portugal, a right-hander that peels over a rocky bottom broken by sand bars in front of the Hotel Tamagueira. Uncrowded except in high season, Buarcos is also the home-town of Portuguese surfing legend known as 'Tomaz de Figueira.'

North of Figueira the coastline becomes empty and wild with a palpable air of desertion. Murtinheira is the first of just a few beaches that are accessible by road and it is a beautiful and unspoilt stretch of white sand flanked by dunes. Still close enough to Figueira to benefit from the scenery and shelter offered by the impressive Serra da Boa Viagem, a forest park offers walks and views while the beach itself is well-equipped, with lifeguards in season, bars, restaurants and parking.

Fourteen kilometers and a twenty minute bus ride from Figueira, Quiaios is one of the long, white sandy beaches with huge Atlantic breakers that the Costa Prata (Silver Coast - between Lisbon and Porto) is famed for. Unlike those nearer to Figueira this beach is situated on a low-lying coastal plain and has nothing to protect it from the Atlantic winds. Flanked by vegetation-covered dunes, the start of a long line of sand dunes known as the Dunas de Quiaios that stretch all the way up the coast to Mira, the beach itself is backed by forests of acacia, eucalyptus and pine trees.

Quiaios is extremely popular with surfers, and the powerful breaking waves can make it dangerous for swimming. Several surf competitions have been held here, some of international importance. Quiaios is a blue flag beach and there are bars, restaurants and even a riding school near the beach. However, Quierios is much more remote than Figueira and the only accommodation option is a well-equipped campsite.

The extensive beach is protected by dunes and powerful waves tend to attract surfers, although the spot is by no means overcrowded. A campsite used to be your only option for accommodation, until some of the fishermen's huts were turned into holiday homes.

Tocha, which is also used for football, has a blue flag, lifeguards in summer, bars, cafes and umbrellas for rent. For those of you with a car and a craving for total solitude, however, there are numerous virtually empty beaches waiting to be explored around both Tocha and Quierios. 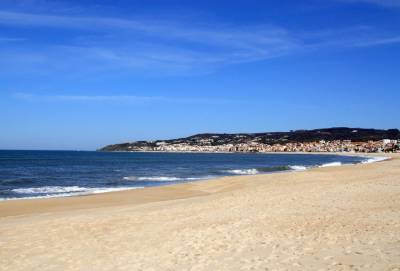 Its nickname, Rainha das Praias (Queen of Beaches) leaves us in no doubt as to the main attraction at Figueira da Foz. True to form, the summer months see its long stretches of golden sands attract swarms of beach lovers who...