The ‘mother house' for the Benedictine order of monks in both Portugal and Brazil, the Monastery of São Martinho de Tibães was founded in around 1060. By the 1500s the original monastery buildings had fallen into disrepair. Its monks therefore set about entirely reconstructed it, using the money they received from donations and ground rents in the region.

The refectory and cloisters were finished in the 1660s, although construction work on the rest of the structure continued for around 100 years more. This is when one of Braga's most important architects got involved. André Soares was not required for the monastery's exterior, but for its interiors. He used his knowledge of the baroque and rococo to form lavish altar pieces to be carved in wood and covered in gilt metal. Stretching from the altar to the high walls and windows of the nave in the main chapel, this work is now considered one of the most important pieces of its type in the country.

The monastery complex lies in vast gardens approximately six kilometres from the centre of Braga. Bus number 50 departs for the monastery several times a day from Praça Conde de Agrolongo. 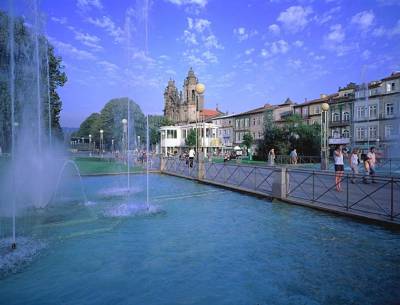