The late 15th century church of São João Baptista is Vila do Conde's "mother" church and without doubt the most interesting in the town. Located in the attractive setting of the central Praça Vasco da Gama the bare granite church stands across from the 18th century town hall and other buildings of the period.

One of the first things you will notice about the church is the main portal with is in the richly decorated Manueline style featuring an arch of intricately carved stonework. This dates back to the time when the church was first built and can be seen in churches and monasteries across the country from this time. Coinciding with the height of the Age of Discoveries this style was something of an expression of the nation's wealth and considered a variant of the Late Gothic. Often typified by maritime themes the Igreja Matriz is no exception with the main columns and arches featuring such flourishes.

The church was expanded in the mid16th century with the addition of two transept chapels, one to either side of the nave to form the typical cruciform plan. Further work in the shape of the imposing Renaissance-style bell tower was completed in 1573.

Much of the decorative work inside the church is of 18th century origin including the Baroque altar with its richly gilded woodwork. However, the most recent additions to the church date back to as recently as 1909 when stained glass windows made in Paris were fitted. These depict scenes from the life of Christ with the largest featuring St John the Baptist.

Other attractions near Igreja Matriz de Vila do Conde 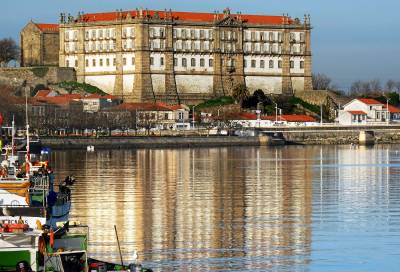