Like many of Portugal's early cathedrals the Sé da Guarda appears part church, part fortress. Plans for the cathedral date back as far as the early 13th century, a time when much of Portugal had only just been clawed back from the Moors and wars with nearby Spain were constant.

Work began on the current mediaeval cathedral in 1390 and continued for 150 years. Over this period the architectural styles evolved in a similar manner to the Monastery of Batalha which was built more or less concurrently with the cathedral. Initially Gothic in design, elements of Manueline flourishes crept in as time went on. Features such as ornate spiralling columns and ribbed vaulting on the ceiling.

Over the centuries the cathedral was 'updated' with many features, most notable the Baroque organ. However, nearly all of these were removed during a late 19th century restoration which returned the cathedral to its more original Gothic / Manueline styling.

Other attractions near Guarda Cathedral 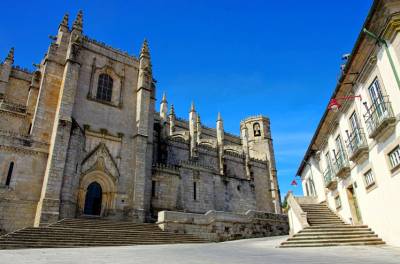 Its proximity to the Spanish border means that this whole area of the Beira region is dotted with fortifications and hilltop villages, and Guarda is no exception. Indeed its very name is an indication of its 'guarding' role....