This Moorish castle dates back to the 10th century and was was one of the last Moorish strongholds in the Algarve. Built to guard Aljezur when it was a river port providing direct access to the sea the castle did its job admirably. It was only in 1249 that the castle fell to the Christians lead by king D. Afonso III

Positioned upon an 88m high hilltop, the castle offers beautiful panoramic views of the surrounding floodplain, the hills of Monchique and the coast.

The castle is built to an irregular polygonal plan and still retains two of the original towers - one semicircular and the other rectangular in shape. With the mud and stone walls measuring 1.5 metres thick and over 9 metres high this was a castle built to withstand most enemies. However, they were not strong enough to survive the great 1755 earthquake intact and it was not until the 1940s that the walls were restored to their former glory.

There are also signs of habitation including the foundations of what were houses and a sizeable cistern with an arched doorway and vaulted ceiling. Food silos were also uncovered which give as an insight into the diet of the people who would have lived here.

As with many ancient defensive locations the history of the site far predates the current structure. This is certainly the case for Aljezur castle with archaeological excavations on the castle mound revealing various artefacts from the Bronze Age to the sixteenth century.Further studies have suggested the site has been continuously and successively occupied by several peoples: the Lusitanians that it made a hillfort here; the Romans a lookout post; the Visigoths, also used it as a lookout; and finally the Moors who built the castle and founded of the town.

Other attractions near Aljezur Castle 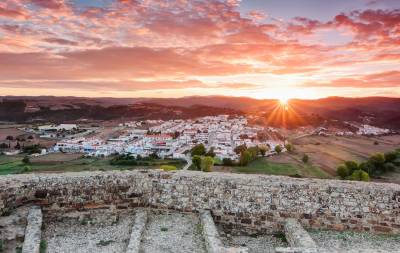