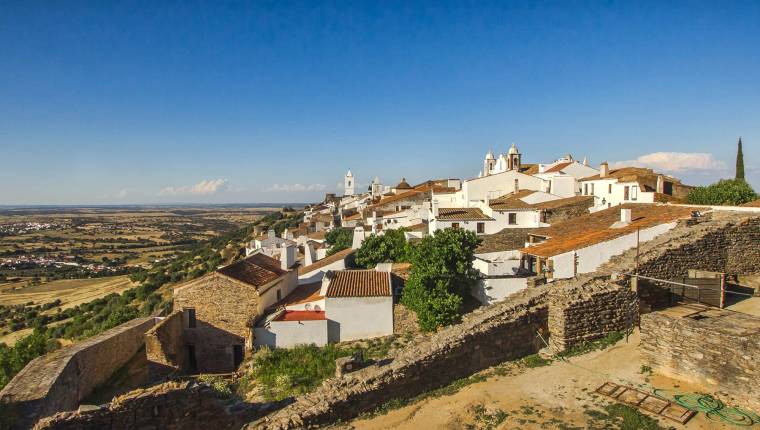 The hilltop village of Monsaraz lives up to its local name of Ninho das Aguias (Eagle's Nest) - perched high above the plains of the Portugal / Spain border the views from here are all encompassing. Although now something of a sleepy backwater this was once a place of great strategic importance, as the fortifications lay testament. To some extent Monsaraz is similar to the region's best known fortified hilltop village, Marvao. However, despite being well worth a visit this little village still remains somewhat off the beaten track.

To enter the village you must pass through one of the four old entryways in the sturdy village walls. The main entrance is the Porta da Vila (Village Door), a large gothic archway defended by two stout towers. Once through the door you are greeted with what is one of the most charming little villages to be found anywhere in Portugal. The cobbled streets and squat whitewashed cottages with their heavy wooden doors and towering chimneys appear to have changed little since medieval times. Except for a few contemporary cues it is almost as if you had entered a time capsule. 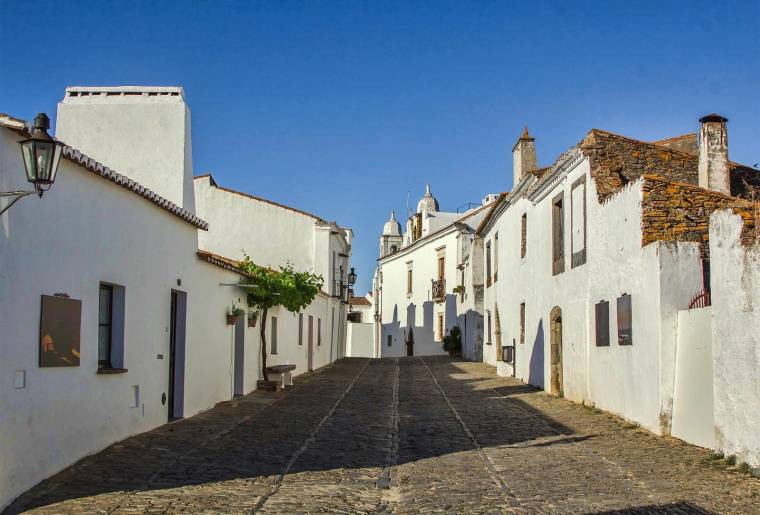 Within the walls the diminutive village consists of only two main streets with a few alleys criss-crossing these. If there were a main street it would by Rua Direita which heads directly up towards the castle, passing the main square and church. All of these are worth a visit with the castle topping most people's list. Built in the 13th century by kings Dom Afonso III and Dinis this was part of the extensive border defences that are such a part of this region. Visitors tend to gravitate towards the castle, not so much for the history, but for the stunning views from the keep known as the Torre das Feiticeiras (the Witches Tower). Laid out below are the plains of the Alentejo with their vineyards and olive groves, whilst in the other direction is the largest man-made reservoir in Western Europe (the Alqueva Lake) and Spain beyond. 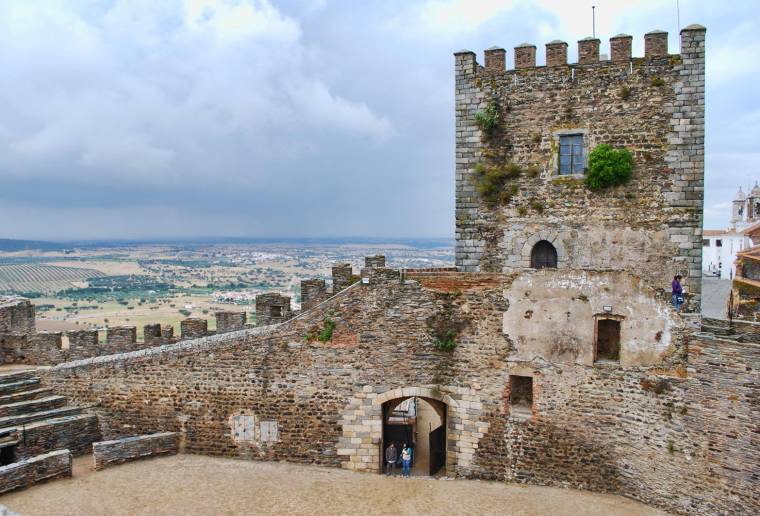 The 16th century church, the Igreja Matriz de Nossa Senhora da Lagoa, sits in the main square off Rua Direita. Inside are high, gold-gilded altars, an order of Christ cross and ornate, painted pillars along with the marble tomb of Gomes Martins Silvestre, a Knight Templar. Outside stands a rather curious 18th century pillory (Pelourinho) which was erected after the 1755 earthquake destroyed its predecessor. The current church was built on the ruins of a previous church which was destroyed after the Black Death swept Europe.Almost next door to the church is the small Museu Do Fresco. Formerly known as the Museu de Arte Sacra, this museum is housed in the gothic Antigos Paços da Audiência which was originally the local courthouse. The collection within contains various religious books, vestments and items along with a fittingly secular fresco entitled O Bom e o Mau Juiz (the Good and the Bad Judge).

Monsaraz and its local area ooze history. The outpost was wrested back from the Moors in 1167 by Gerald "the Fearless" and subsequently gifted to the Knights Templar. Most of what we now see dates back to this time but it is likely Monsaraz was a fortified settlement long before. The surrounding countryside provides further evidence of prehistoric activity in the area with a number of striking megalithic structures to be found. Most notable of these are the 5.6m (18ft) tall Menhir of Outeiro, the cryptically inscribed Menhir of Belhao and most impressive of all the Cromeleque do Xerez. This megalithic monument consists of a square of 49 granite stones surrounding the 4m (12ft) tall central menhir.