No visit to Lisbon would be complete without a stop-off at the majestic Praça do Comércio, one of Europe's largest squares, surrounded on three sides by classical 18th century buildings and opening up on the south side to the Tagus River estuary. This plaza was once known as the "gateway to Lisbon", in recognition of the time when merchant ships arriving at the port would offload their cargo here.  This was also where passenger ships disembarked. 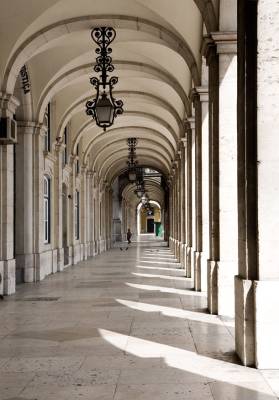 Arcade off Praca do Comercio

The buildings here with their distinctive lemon paint and beautiful arcades were designed to be government offices, to regulate commercial activity in the area.  They were built after the royal palace that once stood here, Palacio da Ribeira was destroyed  by the horrific earthquake and tsunami which devastated the city on 1 November 1755, killing tens of thousands of the city’s residents.  Today these fine buildings are mainly occupied by restaurants, with outdoor seating, making the square a good place to visit in the evening, as the sun sets over the river.  Also found in the plaza, is one of the city’s main tourist offices, a small beer museum and the Lisbon Story Centre, which tells the story of the reconstruction of the city through a 60-minute-long interactive display.

Praça do Comércio was also the site of one of Portuguese history's most notorious events. On February 1st 1908 the Portuguese royal family were crossing the square in an open carriage after returning from their winter hunting lodge in the Alentejo. In a well planned attack two assassins opened fire on the carriage killing King Carlos I instantly and fatally wounded his oldest son and heir, Prince Luís Filipe. The events of that day eventually lead to the overthrow of the monarchy and establishment of Portugal as a republic. They also laid the way for the Salazar dictatorship which lasted until the 1970s. Today, a discreet plaque marks the spot where the king and prince were killed.

The square is dominated by a statue of Jose I, monarch at the time of the earthquake, astride his magnificent horse Gentil, with serpents underfoot. At the north end of the plaza it’s impossible to miss the Arco da Rua Augusta, a triumphal arch completed in 1873, which celebrates some of the city’s great and good.  Climb up onto the viewing platform to take a closer look at the statues of explorer Vasco da Gama and the reforming statesman the Marques de Pombal, who  was the driving force behind the city’s reconstruction after the earthquake struck. The platform also  provides panoramic views of the square and the river beyond.