In 1998 Lisbon was host to Expo '98, this provided the city with an opportunity to regenerate the riverside area to the east of the city.

The site was previously a neglected industrial area comprising of a petrol refinery and old seaplane terminal amongst other things. This providied architects and designers with a blank canvas to on which to proove to the World that Portugal was ready to enter the 21st century as a modern, forward thinking democracy.

And to a large extent they succeeded - the Parque das Nacoes has some outstanding architecture. 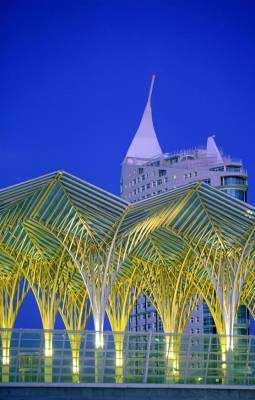 Most visitors will arrive at the Parque das Nações via the metro station of Estação do Oriente. Designed by Spanish architect Santiago Calatrava, it is certainly one of the most stunning buildings of the development. With its cathedral like expanses of glass and steel it's well worth a look even if you aren't catching a train.

The development gives a big nod to Portugal's maritime hero Vasco da Gama with a total of no less than 4 structures and a shopping centre named in his honour. The Vasco da Gama Tower is one of the site's centre pieces and the tallest building in Lisbon. At 575ft (145 metres), the concrete structure commands great views and includes a restaurant near the top. Next are the twin towers of São Gabriel and São Rafael, named after two of Vasco da Gama's ships. Echoing aspects of the design of the tower, these two buildings are home to office and apartment blocks. 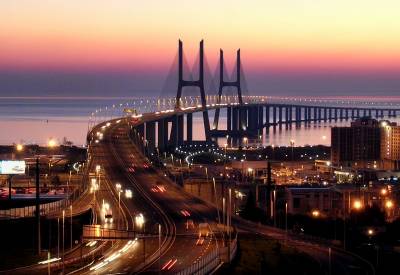 Although not actually part of the Park of Nations, the Vasco da Gama Bridge was built at the same time as the Expo and fits in with the modernist feel. Straddling the Tejo Estuary at around 13Km long it is one of the World's longest bridges. It was built to provide a much needed alternative to the Ponte 25 de Abril in Lisbon.

There is more to the Parque das Nacoes than just the architecture. The site was intended to be sustainable after the Expo and to continue to attract visitors. It has largely succeeded with a plethora of cafes and bars, shopping centre and more notably the educational attractions including the Pavilion of Knowledge and the Oceanarium. 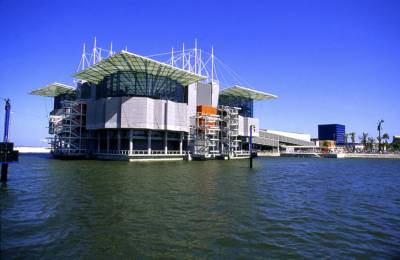 The Oceanarium was designed by American architect Peter Chermayeff and is the largest in Europe. The oceanarium is divided into various ecosystems from around the world with almost 15,000 animals and plants from over 450 different species. The largest tank is the Global Ocean tank which is 7 metres deep and includes some large shark species.

Also in an educational vein are the various Pavilions. The Pavilion of Knowledge is an interactive science and technology museum. This Pavilion offers permanent and temporary exhibitions, conferences, debates, colloquiums and many other activities all housed in yet another fine example of modern architecture