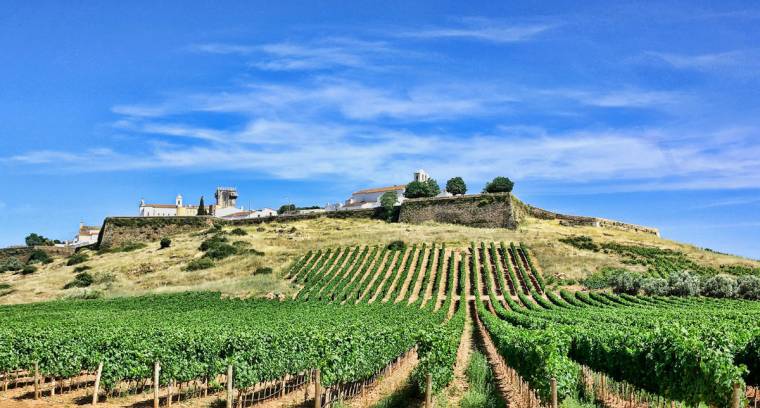 The semi-arid plains of the eastern Alentejo stretch for miles before the pyramid-like settlement of Estremoz looms into view. To sum this place up in a few words, one would choose historically significant, strategically situated and dramatic. During Portugal’s long struggle to retain its sovereignty in the face of invading Spanish armies, Estremoz always played a vital role. This strongly influenced the architectural style of much of the older part of the town, as did the locally-sourced marble which is the building material used for much construction here, both grand and humble.

It is a fortified settlement whose upper quarter still lies behind impressive 13th century ramparts (despite their nearly being destroyed by a massive gunpowder explosion in 1689), crowned by the Torre das Três Coroas (Tower of the Three Crowns); a particularly striking keep of nearly 30 metres in height, which is made entirely of local marble. A medieval air still lends itself to the town, enhanced by the soldiers who to this day patrol the battlements and parapets. Right next door is a castle and palace built in the 14th century in honour of King Dinis’ wife, Dona Isabel, who lived her final moments here in 1336. Today the remarkable building boasts an exclusive pousada offering sophisticated accommodation and dining, thanks to an initiative some thirty years ago to restore the then crumbling masonry, though one doesn’t have to be a guest to gain access to this mighty chunk of Portuguese history.

Also nestled into this ancient town centre, the Santa Isabel chapel is 18th century but again named after the departed queen, whose status was unofficially raised to that of saint by her loyal supporters. Tiles within the chapel tell her story, one panel focusing on a miracle attributed to this benevolent queen in which she is approached by the king whilst smuggling money to the town's poor, but opens her apron to show only roses. The Igreja da Misericórdia is a 16th century church which in a previous incarnation housed a convent for the Maltesas nuns. Nowadays it houses the Museu Rural. Lying as it does in the heart of Alentejo, it is of no surprise that this local museum is devoted to rural life in the region with craftwork and models telling the story.

In terms of crafts, the local pièce de resistance is the twin-spouted earthenware jug which would have traditionally been used by agricultural workers to keep water and wine cool. Also a local favourite are clay figures painted in bright colours, a display in the town museum has a unique collection from the 17th and 18th century, and the month of April sees an annual craft fair come to town.

Outlying villages have their charms too and Borba is a fine example with its fame for distinctive regional wines. Évoramonte’s castle dates from the 1300s and it is where Dom Miguel renounced the throne in favour of his more liberal brother in the 19th century. Also nearby is the town of Vila Viçosa, a favoured residence of past royalty. The palace can be visited and many rooms have been left unaltered since the day on which King Carlos was killed in 1908. Again situated in the marble heartland of Portugal, Vila Viçosa has a museum dedicated to the stone’s importance in the area. The pousada here also resides in an ancient and grand building, the Convent of Chagas de Cristo.