Although Praia da Granja is often described as being in Vila Nova de Gaia it is actually right next door to Espinho, in the town of São Félix da Marinha. From Porto it is about 45 minutes drive to Praia da Granja.

The beach here is a fine stretch of sand, although the foreshore becomes rocky as the tide goes out. During the summer months there is a lifeguard patrol at Granja. Also, being a Blue Flag beach there are plenty of facilities and good disabled access.

The name Granja means farm and this refers to a monastery farm that existed there in the 18th century. At the turn of the 19th/20th century Praia de Granja became quite established as an upmarket resort favoured by the aristocracy and literati. There are still a few reminders of these grander days with some fine old villas lining the small promenade.

Other beaches near Praia da Granja 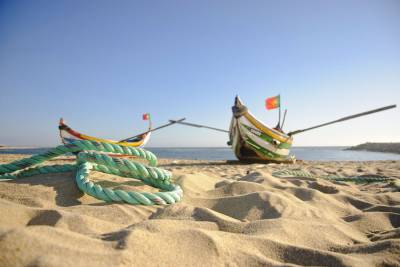