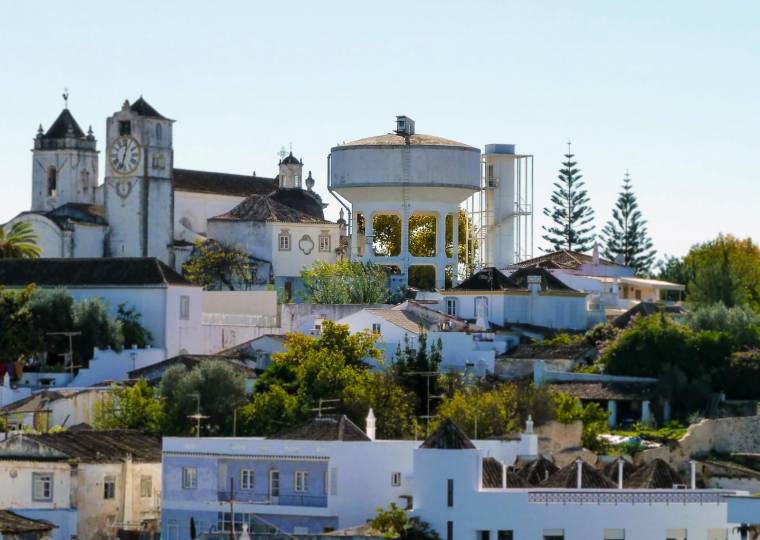 A unique way to see the sights of Tavira is offered in this converted 1930s water tower.  A lift takes visitors to an elevation of 100 metres above sea level where there is an opportunity to experience 360ᵒ panoramic views of the city with the help of a remarkable camera obscura.

Optical experimentation has been going on for millennia, with the earliest written descriptions of devices operating on the same principles as a camera obscura dating back to China in the 4th century B.C.  Leonardo Da Vinci took an interest and Johannes Kepler took matters further.  By the mid-16th century, artists had begun using these prototypes of the modern camera to add perspective and realism to their works. The device makes use of the principle that when light enters a dark room (camera obscura) through a small opening, an inverted image of an object is projected onto the wall opposite.

In the Torre de Tavira, a dark room at the top of the water tower is fitted out with a camera obscura making use of mirrors and lenses, operating in a similar way to a periscope.  Groups of up to 15 people are accompanied by a guide who explains the basic principles by which the device operates and shows tourists real-time views of what’s going on at various locations around the city projected onto a screen. The guide will also point out buildings of particular interest and give some insight into the city’s historic and cultural heritage.

If you’re staying in Tavira for any length of time this is a great way to get an overview of the locality at the start of your stay.

The tour lasts for around 15 minutes and costs €4.  The attraction is open on weekdays from 10am-5pm (4pm October-January) and on Saturdays from 10am-1pm.

Other attractions near Torre de Tavira