One of Portalegre's fabled seven convents, the Convento de São Bernardo is without doubt one of the loveliest buildings in the city. The convent features a mish-mash of architectural styles ranging from 16th century Manueline and Renaissance to 18th century Baroque.

Consecrated in 1572 the convent was built to house "maidens without dowry" who would serve as nuns.

It is well worth making the effort to look inside the convent. The corridors feature arches and beautiful 18th century azulejo panels depicting scenes from St Bernardo's life. There are two cloisters, both with central fountains, along with a chapel. It is here you can see the handsome 16th century marble pulpit crafted by French sculptor, Nicolau de Chantereine, with its decorative grotesques.

The chapel is also the site of the tomb of the bishop who founded the convent, Jorge de Melo. It is said to be one of the largest and most sumptuous tombs in all of Portugal and was described by the visiting King Philip II of Spain as "such a great cage for such a small bird".

The convent is not active anymore, having first become a seminary in 1878 and then an army barracks in 1911. After a spell as the town museum the convent became a college for training the Portuguese military police (GNR) and remains so. However, visitors are still permitted and areas of the old monastery such as the cloisters and corridors are accessible. 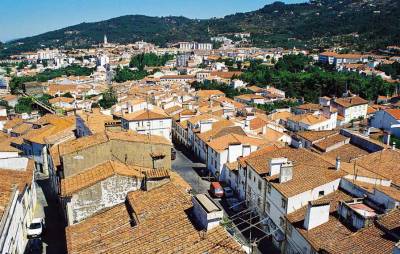 Visiting Portalegre is not so much about visiting one interesting town, but about visiting a whole cluster of northern Alentejan towns, each with their own tale to tell, and with Portalegre at their centre. The region contains a...