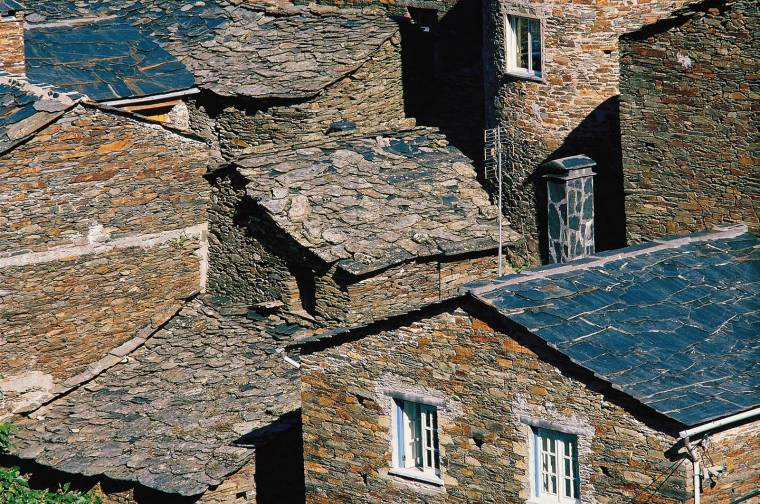 The picturesque little village of Piodão clings to a steeply terraced mountainside deep within the foothills of the Serra de Açor range in central Portugal. This is a protected landscape of deep river valleys, pine & eucalyptus forests and craggy peaks. It is also one of the remotest areas in Portugal and until the 1970s the only way to reach Piodão was on foot or by horse. 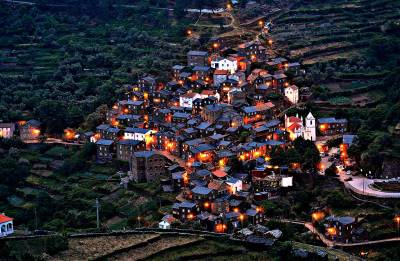 There are a number of pretty villages dotted around this mountainous region but Piodão really stands out for its jumble of tightly packed two and three storey houses made entirely of schist. Schist is a stone found in abundance locally and has an appearance somewhere between slate and granite, with rich warm tones.

As you wander around the steep, narrow cobbled streets you will notice a large number of doors are painted in a bright blue colour. There is a very simple historic reason for this and the story goes that this is the only colour the local shop had. Given Piodão's remote location this is probably true, but whatever the case this is now firmly set in tradition. Also traditional are the crosses over the doorways which it is said ward of curses and thunderstorms. 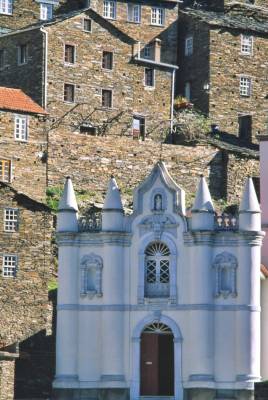 Amongst the schist houses, with their schist tiled roofs, and the schist cobbled alleyways there is one building that instantly stands out - the parish church. Not only does it stand out for being the only whitewashed building in a sea of greys, it is quite an unusual building in its own right. The facade has four cone-topped cylindrical buttresses which give it something of a Disney castle look. Dating back to the early 1800s the church was funded by the inhabitants of the village and built on the site of a former chapel.

Piodão is a village that history seems to have passed by in every sense and very little of mention has taken place here over the centuries. However, it was said to have been a place where fugitives could escape justice and this may have been the case for one of the perpetrators of a particularly dark episode in Portugal's history. It is thought that in the 14th century one of the murderer's of Inês de Castro may have fled here to escape the wrath of prince D. Pedro.