Photos of Portugal's most amazing places

I spend a lot of time looking at photographs of Portugal. Often when I'm creating content I'll see the photo first and be so blown away that I'll then have to think of an article to go with it!

Of course Portugal is blessed with having a wealth of amazing sights, both natural and man made. Some are easier to photograph than others. For instance stand on the cliffs at Lagos' Ponta de Piedade on a sunny afternoon and as long as you can aim a camera you should have a masterpiece. The same goes for many of the interiors of Portugal's fabulous palaces and churches - admittedly the exposure can be a little trickier indoors.

The collection of photos below represent some of the best I have come across (and taken) in the pursuit of creating this website. I hope they do this beautiful and fascinating country justice. 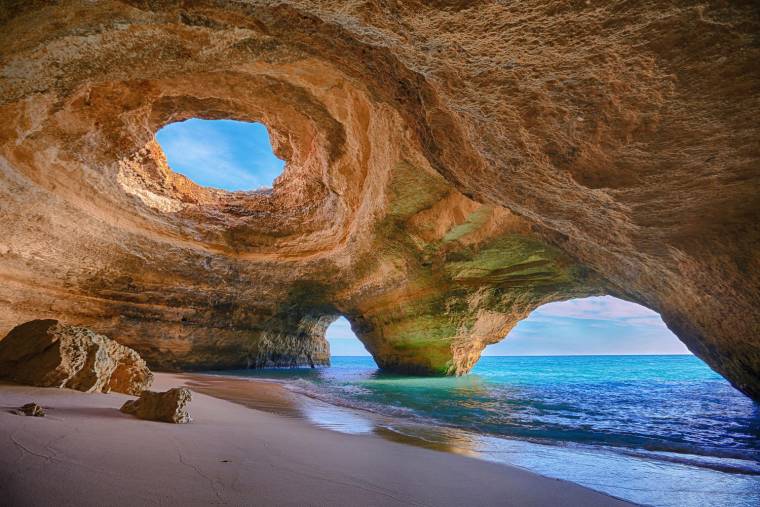 Located just around the corner from Benagil beach near Carvoeiro is this amazing sea cave. Over the years the roof has collapsed to let the light in and create this amazing little indoor beach. 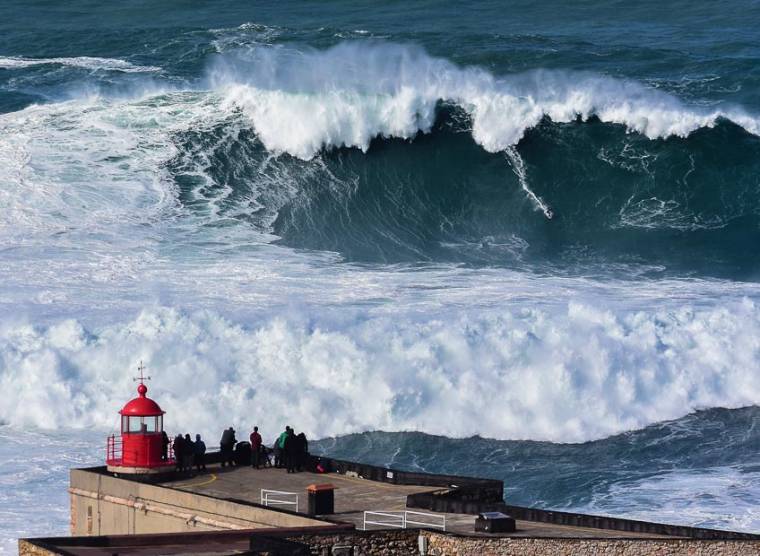 Nazaré's Praia do Norte has been Portugal's best known big wave spot for years. However, it is only relatively recently, since the advent of tow-in surfing, that truly huge waves have been surfed here. In fact the largest wave ever surfed was here and it measured around the 100ft (30 metre) mark. 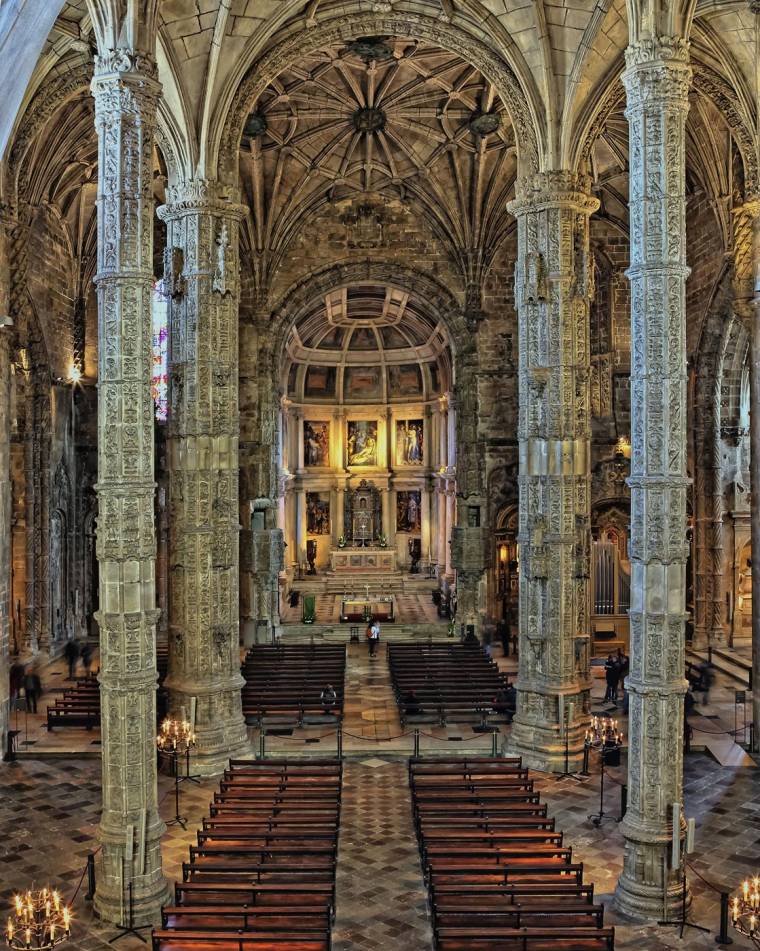 Possibly the finest building in all Portugal and without doubt the best example of Manueline architecture to be seen anywhere. This is the stunning interior of the church in the 16th century Mosteiro dos Jerónimos in Belém.

Portugal's second city, Porto, had until recently taken very much of a backseat to Lisbon. Things have changed since I lived here 20 years ago and it is beginning to rival Lisbon as a destination. With views like this over the port lodges of Vila Nova de Gaia and the river Douro towards Porto, it isn't hard to see why. 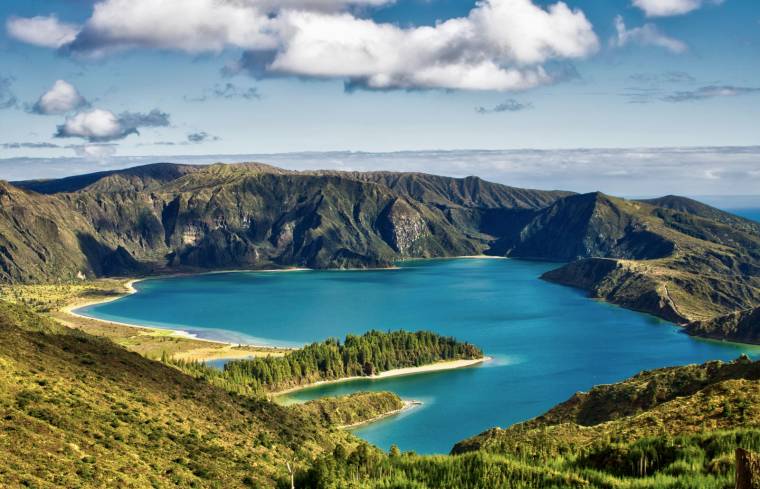 With their verdant green, volcanic landscape, and rising straight out of the middle of the Atlantic Ocean the Azores are often likened to the Hawaiian islands. This is the Lagoa do Fogo (Lake of Fire) and it is formed in the crater of vast volcano. 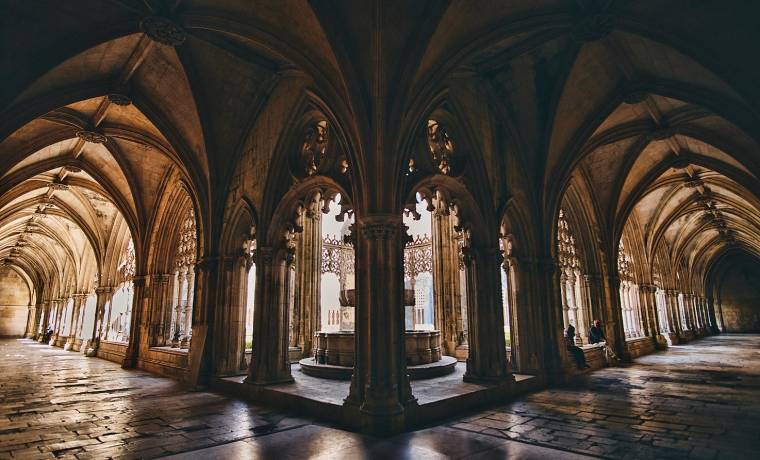 The vast and beautiful monastery in Batalha is rightly placed on the UNESCO World Heritage list. A mix of Gothic and Manueline styling there are several distinct chapels and cloisters within the Batalha complex, each with its own style and features. 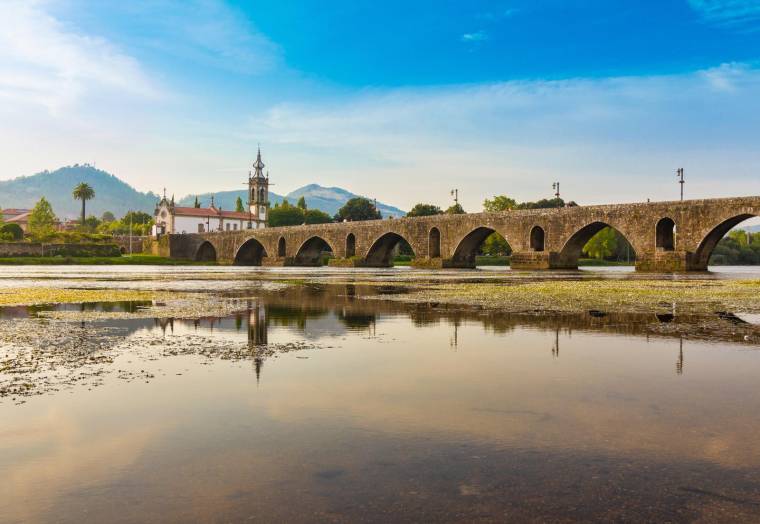 The Minho region of Portugal marks the northern border with Spain. It is a land of lush valleys, meandering rivers and granite peaks. There is great natural beauty everywhere but one of the most charming little towns you will find anywhere is Ponte de Lima with its medieval bridge over the River Lima. 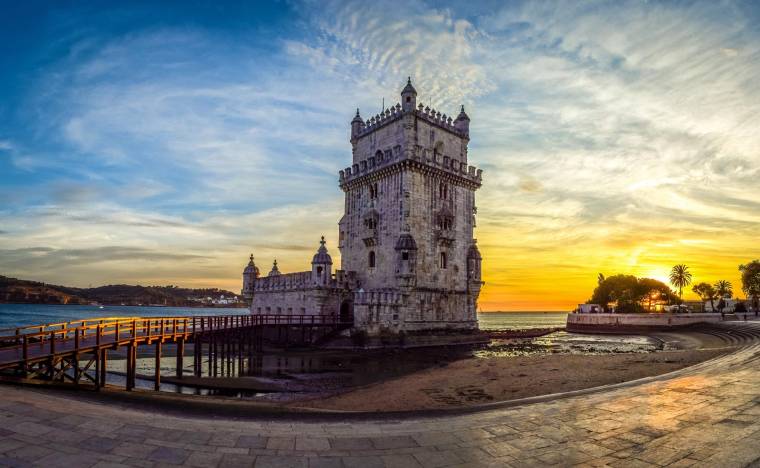 The Belem Tower is one of Portugal's most iconic buildings. Set on the banks of the River Tejo to defend the entrance to Lisbon this 16th century fortress is a riot of Manueline styling. As well as prickling with cannons it is decorated with a range of motifs, arches and pinnacles. 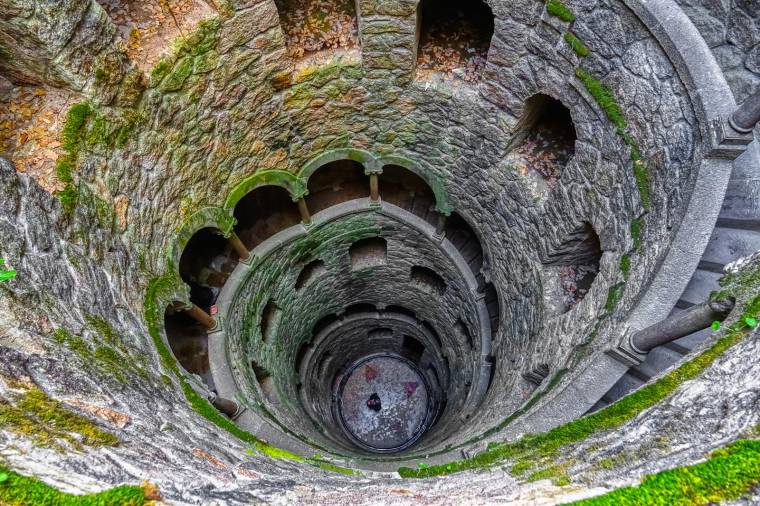 In the fairytale hill town of Sintra it is pretty hard for a building to stand out. Any number of fine mansions dot the forested hillside which is capped by the Disney-esque Pena Palace. However, the Quinta da Regaleira more than makes its mark with its opulent Romantic style palace and parkland. This is the Pozo Iniciático, a deep well with a spiral staircase running around the outside. 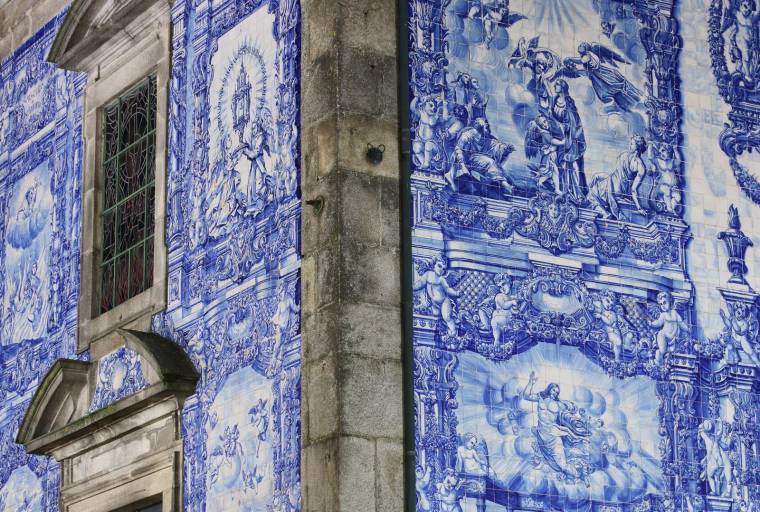 The blue and white tiles known as azulejos are ubiquitous throughout Portugal. Appearing on everything from railway stations to park benches they often portray historic or religious scenes. There are beautiful examples in every city in Portugal, but Porto has some of the finest examples such as Sao Bento station; or here on the Capela de Santa Catarina (or Chapel of Souls) just off Porto's main shopping street. 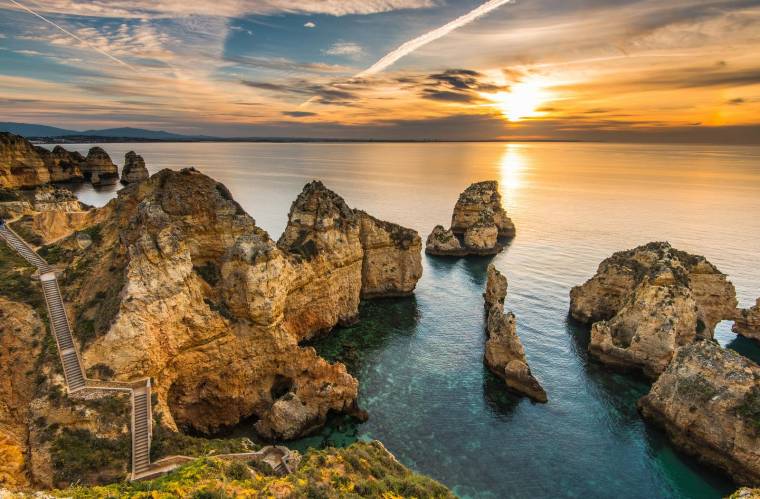 The sea cliffs on the western edge of Lagos have been eroded into some fantastical shapes over the milenia. Also known as the "Golden Coast" the sandstone cliffs here have been moulded into grottoes, arches and sea stacks. Combine with the crystal clear turquoise waters of the Algarve this makes of one of the most picturesque spots in Portugal. 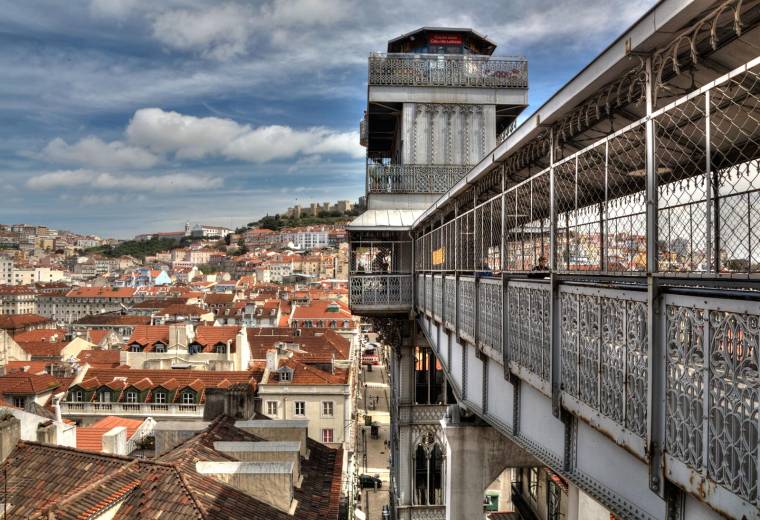 Rising 47 metres (145 ft) from the Baixa (downtown) district to Chiado this vintage contraption carries up to 24 passengers up the hill. The elevador was designed by a student of Gustave Eiffel (of tower fame) and does bear a few nods to this within its cast iron frame. 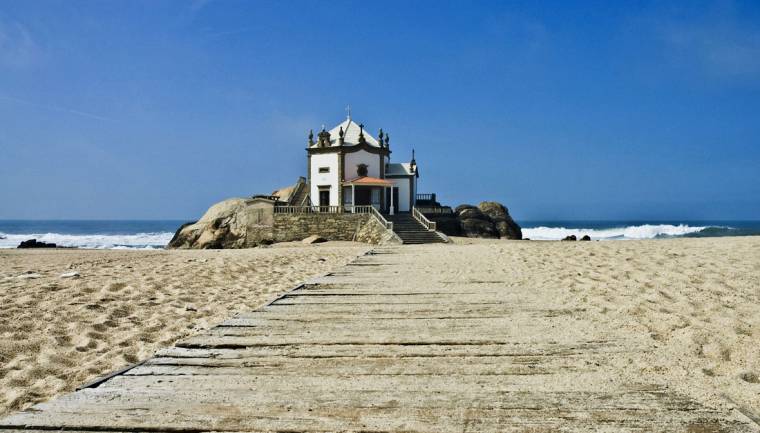 Not far from Porto is the sandy beach of Miramar. This pleasant sandy beach is much like the others on this stretch of coast with the exception of the 17th century Baroque chapel clinging to the large rock on the water's edge. It is something of a miracle the  Capela do Senhora Pedra is still there as this beach takes the full force of the Atlantic Ocean. 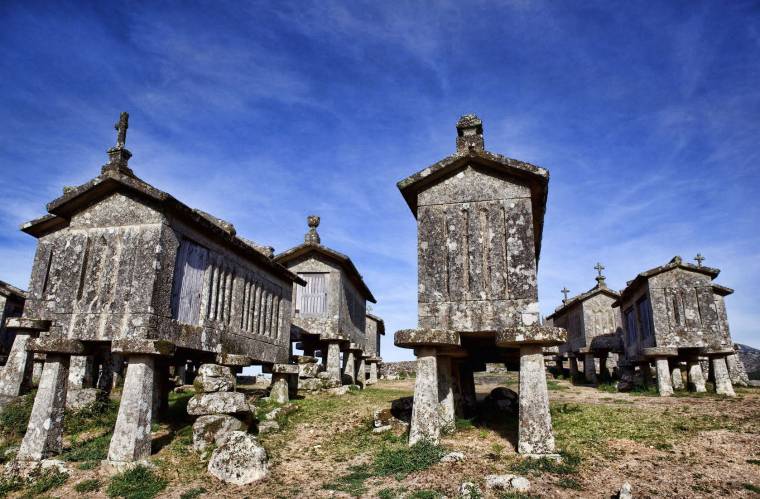 Despite looking like tombs these are actually grain stores and are found in only a couple of places in the far north of Portugal - they are more common in neighbouring Galicia. Known as espigueiros they keep the harvested crops out of the reach of the rats and damp. They are made of granite from the Peneda-Gerês National Park and date back to the 18th century. 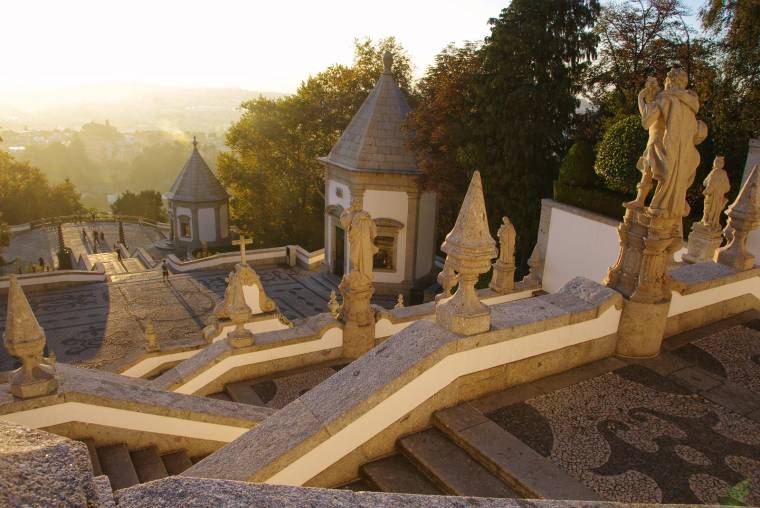 Located on a hilltop, there are 580 steps ascending 116 metres (381 ft) to reach the Baroque church of Bom Jesus in Braga. Judging by this view it is worth the effort! 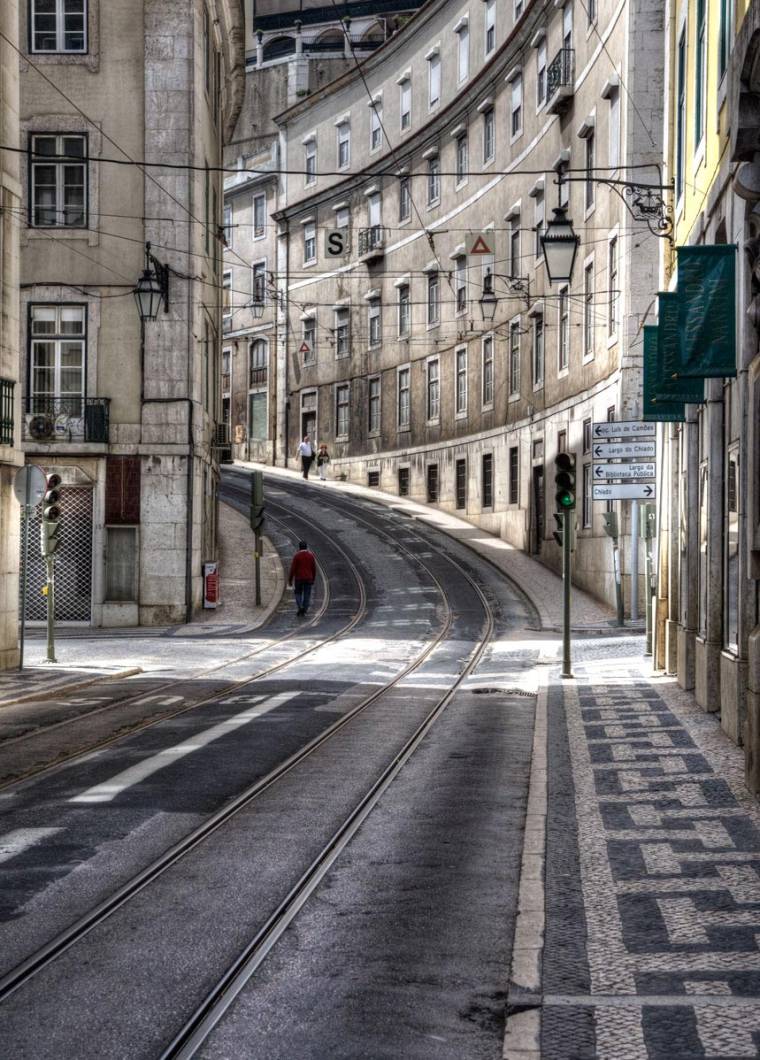 This is the view up Rua da Conceição in Lisbon's downtown Baixa district. It's easy to identify this street as the rest of this part of central Lisbon is built on a grid with everything ruler straight and at right angles. However, the grid pattern soon starts to fall apart as you hit the hills up to Chiado and Bairro Alto. 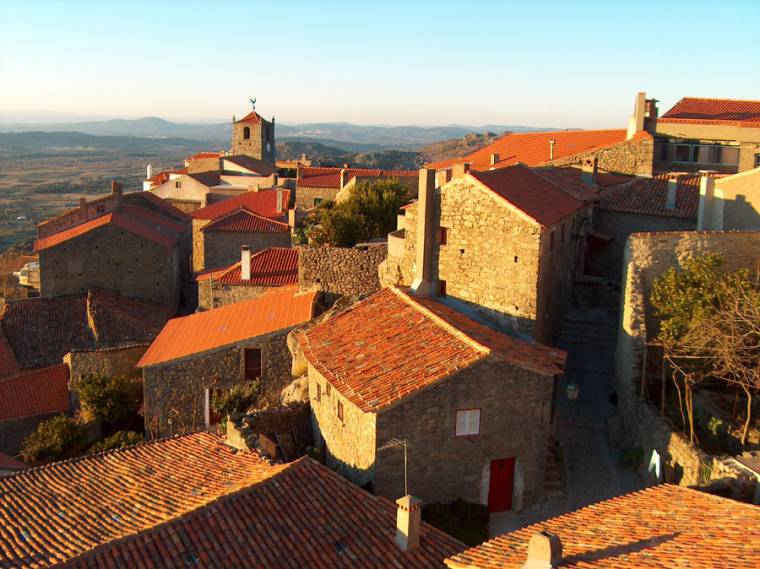 The village of Monsanto clings to a steep hillside strewn with granite boulders the size of houses. Among these are a jumble of stone cottages with cobbled streets so narrow you won't see any cars here. This is possibly one of the prettiest and most unspoilt villages in all Portugal. In fact it was once voted the "most Portuguese village in Portugal". 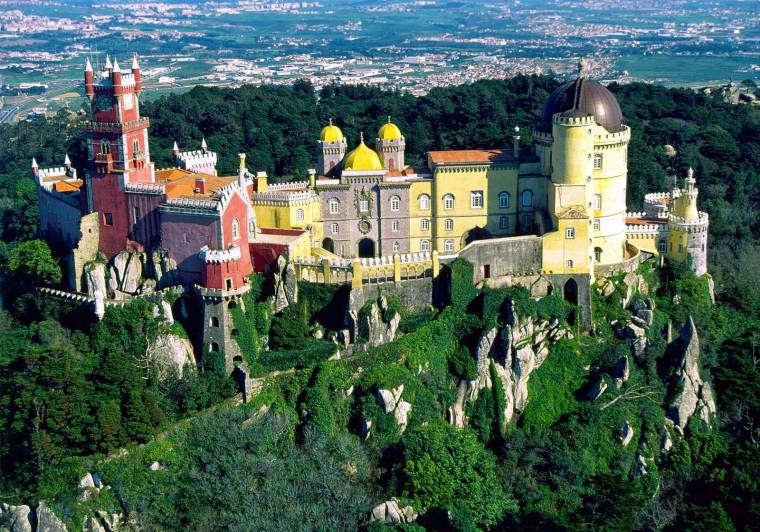 Sitting on top of the heavily wooded Serra de Sintra the Pena Palace is pure fairytale. This Disney-esque castle was built in the Romanticist style in the 1840s for Ferdinand of Saxe-Coburg-Gotha, husband of Queen Maria II. It combines every architectural style imaginable; Neo-Manueline, Neo-Islamic and Medieval. And if clocktowers, turrets and cupolas weren't enough it is painted bright yellow and terracotta! 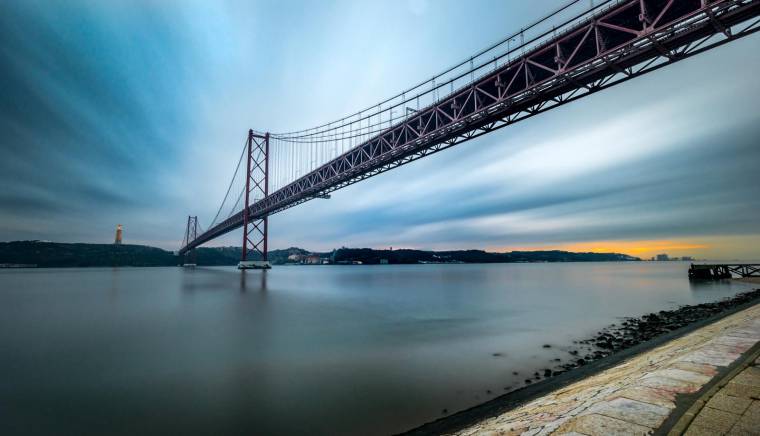 When built this was the 5th longest suspension bridge in the world. Stretching over 2 kilometres (1.4 miles) across the river Tejo the bridge is often compared to the Golden Gate in San Francisco. It is true both bridges have two towers and are the same colour, but the 25 de Abril bridge was actually built by a different company (from San Francisco!). 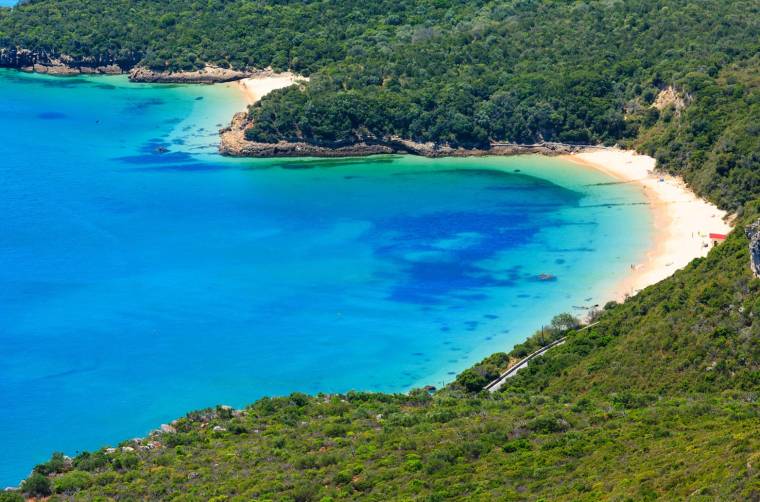 Located within a day trip of Lisbon are the stunning beaches of the Serra da Arrábida Natural Park. Clear azure waters backed by mountainous, forested terrain give this place an almost tropical feel. It is perhaps not surprising that this beach was once voted ''most beautiful beach in Europe". 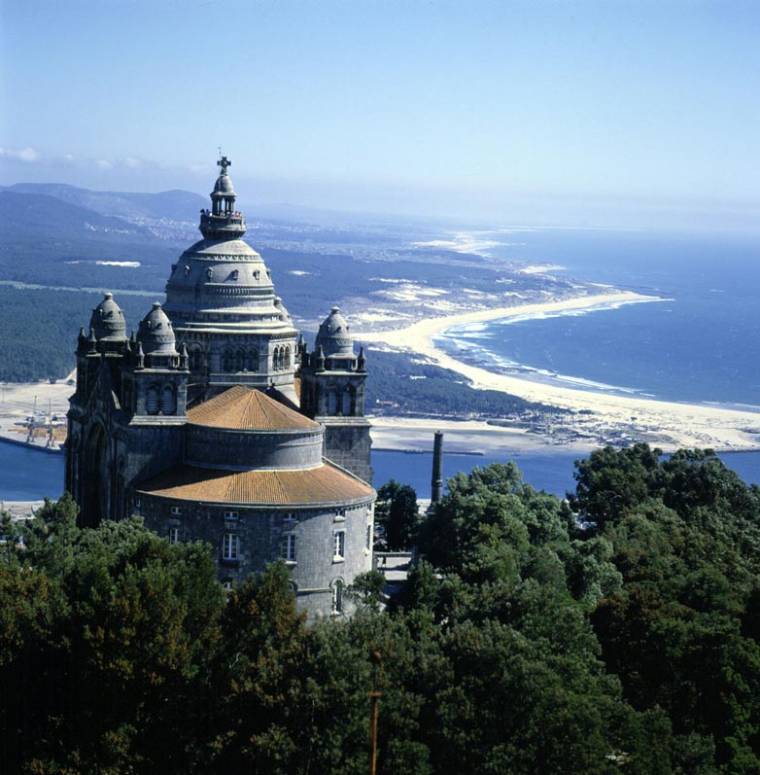 The Santuário de Santa Luzia basilica is perched on the wooded hill of the same name. It is worth the trek up to the top just for the view out over the coast beyond the river Lima at Viana do Castelo.