Born in Portuguese town of Sines in either 1460 or 1469, Vasco de Gama became one of the leading explorers of the Age of Discovery.  He is the first European to have sailed from Europe to India, without crossing over land and in doing so opened up a lucrative spice trade route, as well as laying the foundations for the Portuguese colonisation of parts of Asia. Memorials to him can be found in various locations throughout Portugal and beyond. There is even a crater on the moon named after him. 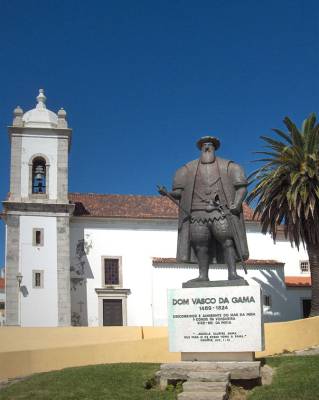 His first voyage to India left Lisbon on 8th July 1497 with a fleet of just 4 sailing vessels.  It took a route still used by ships today, sailing down the west African coastline to Sierra Leone and then heading south into open sea, around the Cape of Good Hope up the east coast of Africa to present day Kenya, where he took on board an experienced pilot, thought to be Arab or Indian, thereby enabling the fleet to sail across the Indian Ocean in just 23 days.

He landed in Calicut (modern day Kozhikode) on 20th May 1498. He was unable to establish the desired trading treaty with the Indian rulers and left for the journey back to Portugal, a voyage marred by heavy monsoons and scurvy.  Out of the 170 crew who had set sail from Lisbon only 55 made it back alive, da Gama’s brother being among those lost. On his return da Gama was showered with honours by a grateful King Manuel I, the royal coffers gaining a fortune selling the spices he had brought back. 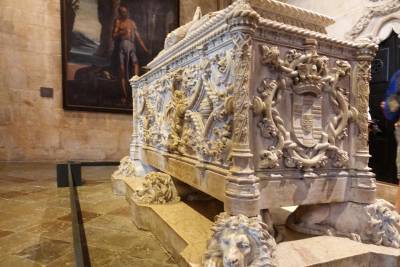 Further armadas were dispatched to India, da Gama himself leading two of them.  In 1524 King John II of Portugal gave him the title of Viceroy of India.  His final voyage to India was in 1524.  On his arrival he tried to sort out corrupt practices amongst the Portuguese settlers, but he died there of malaria in 1524.

Vasco da Gama’s reputation as a leading figure of his age is somewhat tarnished by stories of acts of piracy and brutality.  It is said by some historians that he once ordered the torching an Arab cargo ship with women and children on board, killing innocent victims and stealing the goods on board.

He is buried in the Jeronimos Monastery in Belem, not far from the spot where his voyage of discovery in 1497 set sail.