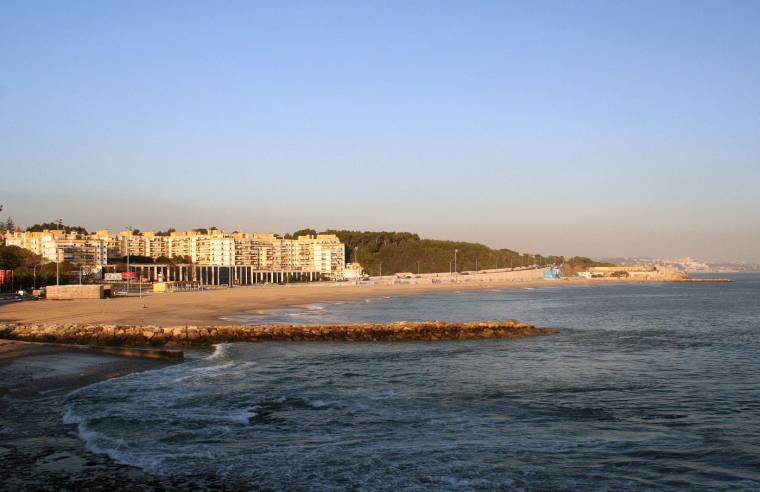 Praia de Santo Amaro de Oeiras is located on the banks of the river Tejo roughly halfway between Lisbon and Estoril. This makes it one of the closest popular beaches to the Portuguese capital.

The sandy beach at Santo Amaro de Oeiras is around 1 km long and these are well groomed by the local council to keep the beach nice and clean. Unfortunately the water quality here suffers somewhat as it is largely fed by the river as it flows out of Lisbon. If you are planning on having a swim then it is worth considering one of the beaches further up the line, i.e. beyond Estoril.

Compared with Carcavelos beach, which is just around the corner, the sea here is fairly sheltered. You may see surfers here once in a while, but only when it is too stormy anywhere else. There is a lifeguard service here in the summer as this is popular spot. There is always some activity on the beach such as beach volleyball, and this can continue well into the evening as there are floodlights to light up the beach late into the night.

The Oeiras waterfront is quite interesting and it may be explored via the wide promenade running behind the beach which continues a couple of kilometres in both directions. Just west of the beach is Oeiras Marina and behind this is the Piscina Oceânica de Oeiras, a large saltwater swimming pool replete with high-diving boards. Keep going and you'll reach the next beach, the cosy little Praia da Torre.

In the opposite direction is the peach-coloured little Forte de São João das Maias which stands guard over the eastern end of Santo Amaro beach. There are a few beaches closer to Lisbon, but the water quality fares even worse than at Praia de Santo Amaro.