Given the long stretch of golden sand that lies in front of Quarteira it is little surprise that the resort was one of the earliest to be developed on the Algarve coast.

The beach is backed by Quarteira's long broad promenade (Avenida Infante de Sagres) which is lined with palm trees and innumerable cafes and bars. As you would imagine from such a well established resort there are no shortage of facilities at hand, both on the beach and in the town behind. As a Blue Flag beach you have the assurance of clean water and the added safety of a lifeguard on duty during the summer season. Quarteira is also regarded as an accessible beach with level access from several points along the seafront.

Whilst the western end of the beach is limited by Quarteira'a busy working harbour the beach is seemingly endless in the other direction, stretching virtually all the way to Faro. Admittedly the name of the beach does change as it runs ever eastward and Quarteira beach itself is the one mile (1.5km) patch of sand in front of the resort itself.

The beach here is divided up by a series of rock groynes which help keep the sand in place whilst also offering some protection from the waves. It should be noted that the beach shelves quite steeply between the breakwaters so care should be taken when the tide is in as you can quickly find yourself out of your depth.

Other beaches near Praia de Quarteira 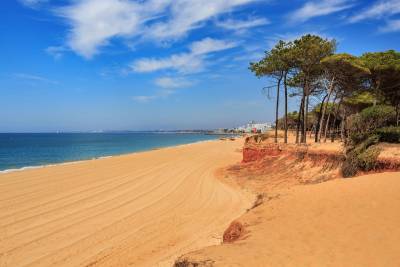 Quarteira was one of the first resorts to be developed along the Algarve coast. Apparently there was once a small fishing village here, but before you start imagining quaint whitewashed fisherman's cottages huddled around a little harbour that...