This sandy stretch is situated a few kilometres to the south of the popular resort of Porto Covo. With its backdrop of sand dunes and scrubland beyond it has a fairly wild feel to it. This is somewhat contradicted (or maybe reinforced) by the large, abandoned 16th fortress that overlooks the beach.

The name, Ilha do Pessegueiro, refers to the island which lies a couple of hundred metres off the beach. Translated as "peach tree island" this is somewhat misleading - yes, it is an island but you won't find any peach trees here. It is believed that the name is derived from a Roman word "piscatorius" which referred to a fish salting factory that once existed on the island. This is long gone but what you can still make out on the island are the remains of the Forte do Santo Alberto.

Praia da Ilha is a great get away spot from the summer crowds a little further up the coast. There are a few basic facilities here including a car park and a restaurant, but there is no lifeguard service.

Other beaches near Praia da Ilha do Pessegueiro 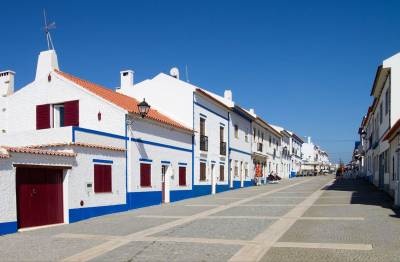 If the archetypal traditional Portuguese fishing village still exists then maybe Porto Côvo is this. Even the name translates as port of the fishing net. A jumble of whitewashed cottages, cobbled streets and pretty squares...