Sanctuary of Our Lady of Nazaré

The Hermitage of Our Lady of Nazareth (Santuário de Nossa Senhora da Nazaré) stands in an imposing hilltop position in Sitio, overlooking the town of Nazare in Western Portugal. The original Ermida da Memoria (Memorial Chapel) close by was built in the 14th century but was too small to accommodate the many pilgrims who were drawn to the site, so the much larger Ermida da Nossa Senhora da Nazare was built in 17th century.

According to local legend, in September 1182 Dom Fuas Roupinho, mayor of the town, was hunting a deer when the animal he was following leapt over a steep cliff into the sea below.  Unable to stop his horse from following over the drop to certain death, the knight remembered that there was a nearby grotto dedicated to the Madonna.  He implored her to help him and the horse suddenly stopped, leaving its hoof print in the rock face.A statue of a Black Madonna holding the Christ Child was found in the grotto, together with an ancient scroll telling the history of the statue.  It was said to have been carved by St Joseph of Nazareth and venerated by the Apostles, later passing into the guardianship of St Augustine. The statue was believed to have miraculous properties and pilgrims came from all over Portugal to visit the shrine.

Today the 17th century Hermitage exterior has two large bell towers and is flanked by a former hospital and palace, where visiting royalty and dignitaries were housed in times gone by. An imprint of a horseshoe can be found on a rock not far from the church, by the 14th century Ermida da Memoria.

Inside the church, which has a single nave and a painted wooden ceiling, a Black Madonna statue, said to be the original, can still be seen above the richly gilded altar, which is flanked by twisted columns.

Each year a major pilgrimage takes place here on 8th September and there are a number of traditional entertainments and spectacles to celebrate this event. 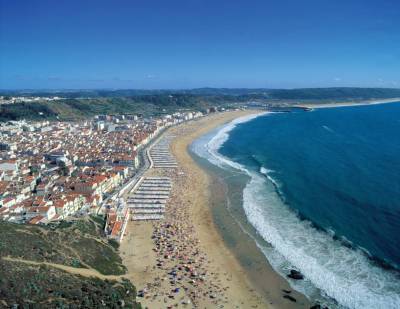