The attractive medieval bridge crossing the River Lima dates back to 1368, but there has been a crossing here for much longer and this is where the town gets its name from.

Spanning the slow flowing Lima river this, granite bridge features fourteen arches. There were originally seventeen but three have been lost as the riverside was developed over the centuries.

The bridge actually still contains five arches from the old Roman bridge which presumably dates back to the 1st century. These form a section which now runs over dry ground on the opposite bank of the river to the town.

It is said that during the Roman occupation of Portugal the forces stationed here found a worrying resemblance between the River Lima and the River Lethe (or River of Forgetfulness) , one of the five mythical rivers of the Underworld. They feared if they drank or tried to cross the river it would completely erase their memories.

In the year 138 BC the story goes that a Roman legion stopped at the river, refusing to cross. Eventually General Decimus Junius Brutus took the decision to quash the superstition once and for all and made the crossing himself. Admittedly he was on a horse, but this was enough to encourage his men to take the plunge. However,just to be sure they had not in fact lost their minds to "Oblivion" they were made to shout out their own names as they crossed the river.

To commemorate this tale there are now statues of a Roman phalanx on one side of the river with the general on horseback, encouraging them across, on the other. 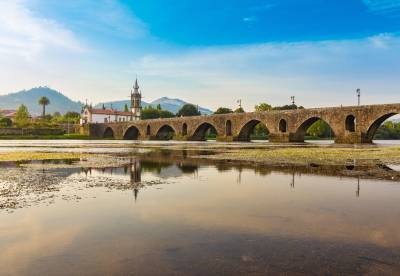 As the River Lima meanders its way through picture-postcard countryside towards the coast at Viana do Castelo it passes through it passes through any number of charming, ancient villages. Of all these it is...