Reputed to be the oldest building in Lisbon, the cathedral (Sé de Lisboa) certainly has the appearance of being built to last. Compared to the frivolous Manueline architecture of the Jeronimos Monastery the Romanesque lines of the cathedral appear quite austere. Along with castellated walls and arrow slits in the towers Lisbon Cathedral, like other Portuguese cathedrals of the period, had the appearance of a fortress as much as a church.

Work began on the cathedral in 1147, the same year that Lisbon was recaptured from the Moors. Built on the site of the Moorish main mosque the Sé served as both a monument to the liberation of Lisbon and a stronghold should the Moors return. Shortly after the cathedral was founded the remains of the 3rd century Saint Vincent of Saragossa, patron saint of Lisbon, were returned and placed in the cathedral. It is said that after being martyred St Vincent's body was protected by a flock ravens, and to this day ravens remain a symbol of Lisbon. These relics are now held in the sacristy (or treasury) of the cathedral.

The plain, fortress-like façade of the cathedral is punctuated by a great rose window positioned over the main entrance; this and the two bell towers are the clearest indications of the building's purpose. The majority of the cathedral's architecture is Romanesque in style, although there are considerable Gothic influences to be seen in sections added in the 13th century. The most notable example of the latter are the cloister and choir. The interior is fairly sombre and austere, although this is partly attributed to the extensive damage caused by the great earthquake of 1755. The exception is the main chapel which was rebuilt after the earthquake in a more colourful neoclassical and Rococo style featuring coloured marble.

The renovation work continued into the 20th century with the rose window being rebuilt from original fragments in the 1930s. During this period of restoration many of the neoclassical features, both inside and out, were removed to give the cathedral a more authentic mediaeval look.

Over recent years excavations of the courtyard of the cloister have revealed many archeological finds dating back as far as Roman times.

Other attractions near Lisbon Cathedral 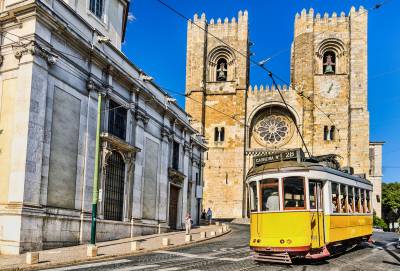 Occupying the tallest of Lisbon's hills, the district of Alfama brims with the feel of times gone by and is the truly emblematic part of the city. Largely spared in the earthquake of 1755, it is still a maze of narrow streets and...