The Fortaleza de São Filipe (Fort of St Philip) dominates the skyline above Setubal.  It can be reached from the town below by an exhilarating 30-minute hike or by road.

Today the fort is home to an upmarket 16-room Pousada hotel, but because this means the building is open to the public, casual visitors are free to explore the ramparts, grounds and battlements to take in the panoramic views of Setubal, the shimmering Atlantic and the Troia Peninsula. Why not book an evening meal in the hotel's restaurant, which serves traditional local fare including fresh seafood and Setubal orange tart? The sunsets from the outside terrace here can be quite spectacular.

The Capela de São Filipe (Chapel of St Philip), housed within the complex is decorated with traditional Portuguese blue and white-glazed tiles, and is well worth a visit.  Some parts of the building, including the labyrinth of underground tunnels beneath the fortress are not generally accessible.

The oldest parts of the outside walls date from the 14th century, but the star-shaped fortress itself was constructed in 1590 on the orders of Philip II of Spain (Philip I of Portugal) to guard against a possible attack from the English and from North African pirates.The fortress has also been used as a prison. 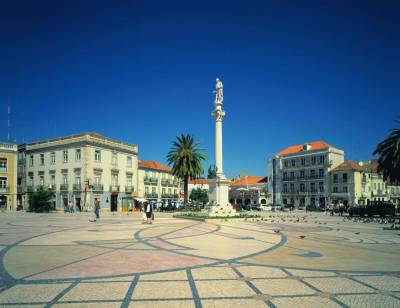