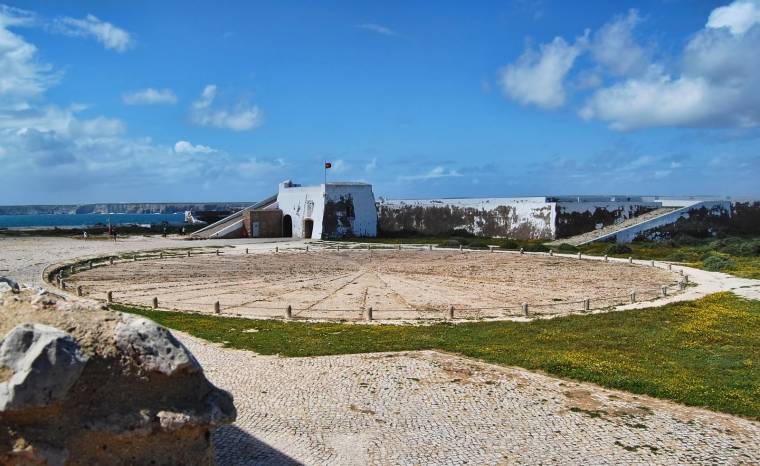 The Fort of Sagres is located on a dramatic, narrow headland that juts out into the Atlantic Ocean to form Portugal's most south-westerly point. It dates back to the 15th Century, a time when the Portuguese coast was often the target of raids from the Barbary pirates who heralded from the nearby North African shores.

The Fortaleza de Sagres was built on the orders of Henry the Navigator (Infante D. Henrique), one of the chief drivers in what became known as the Age of Discoveries.  Henry spent much of his time here before setting off on his voyages upon which he was the first European to discover the Azores and large parts of the African coastline. Before the Age of Discoveries, many Europeans had been scared to venture too far out into the Atlantic out of fear that, among other things, sea monsters existed that would swallow their ships whole.

Henry also has the dubious claim of being the founder of the Atlantic slave trade.

Years after Henry’s death here in 1460, the fort was raided by the English sailor and adventurer Sir Francis Drake, but it was the devastating earthquake and tsunami in 1755 that almost destroyed the fortress. It is hard to imagine today, but the tsunami caused the sea to crash over the high cliffs here, causing devastation in its path.

Today, the walls and impressive entrance arch which stretch across the headland are all that remain of the original building. However, the fort was restored in the 20th century and is now one of Sagres' most popular attractions. Visitors can learn about the fort's history from the various signs dotted around the area, and walk around the outcrop, enjoying the panoramic views over the Atlantic Ocean and the rugged Cabo de Vincent coastline.

A small entrance fee gives visitors an opportunity to explore the cobbled battlements, with their cannons and there is a chance to see an early navigational wind compass-rose which measures 43 metres in diameter.  There is also a small chapel - the Nossa Senhora da Graca - with some interesting depictions of Saint Vicente.  Facilities here have improved over recent years with the creation of a modern space housing temporary exhibitions, a multimedia centre, shop and cafeteria.

Other attractions near Fortaleza de Sagres