The Elevador de Santa Justa (Santa Justa lift) is a 47 metres (145ft) Lisbon's only remaining vertical elevator and connects Rua do Ouro in the Baixa to Largo do Carmo near Bairro Alto. It was built, along with several other cable powered urban lifts and funiculars, in a time before cars and the Metro. Whilst this may sound quite utilitarian and uninteresting nothing could be further from the truth.

Inaugurated in 1902, the elevator is a cast iron tower decorated with Neo-Gothic style filigrana details. Some say it is reminiscent of the Eiffel Tower in Paris, and this is not entirely coincidence. Whilst some wrongly site the architect as Gustave Eiffel it was actually one of his apprentices, Porto born Raoul Mesnier du Ponsard.
The lift was initially powered by steam, but only a few years after it was opened the power source was converted to the electrical motors that still run today.

The elevator is capable of carrying up to 24 passengers the equivalent of seven stories in two cabins. But the tower doesn't stop here! There is a further level accessed by spiral stairways which now operates as a cafe. Whilst there is nothing spectacular about this rather pricey little cafe the views of the city are some of the best in Lisbon. 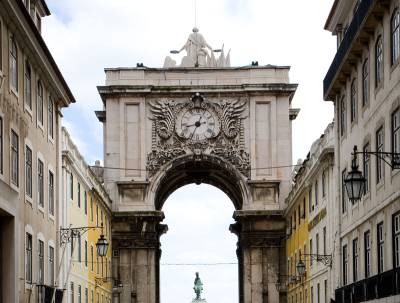