Literally meaning the "Aqueduct of Silver Water", the Agua de Prata Aqueduct is an incredible testament to 16th century engineering.  It was built to ensure that the strategically important citadel of Elvira would not run out of clean drinking water during the hot, dry summers. King John III of Portugal appointed Francisco de Arruda, who had built Lisbon's Belem Tower to oversee the project, which took six years to construct, finally opening in 1537.

The aqueduct was 18 kilometres in length and linked Evora city centre to the Graca do Divor water source via a series of tunnels and arches. The tallest arch is 26 metres in height. Originally the aqueduct connected to the marble, crowned fountain in Praca do Giraldo, the city's main square, but this connection fell into disuse after restoration works following damage inflicted during the 17th century Wars of Succession and Restoration.

An interesting way to get up-close to the structure is to take the 8 kilometre-long Agua de Prata footpath which runs alongside part of the aqueduct, through fields and farms outside the city walls. The pathway does not extend all the way along the aqueduct, but the further north it stretches, the less interesting the aqueduct becomes.  Within the city walls, houses and shops have been incorporated over the years into the arches.  The best place to see this is probably around the Rua do Cano in the northern end of the city.  Also worth taking a look at is Arruda's Renaissance Water Box in Rua Nova de Santiago with its 12 Tuscan columns. 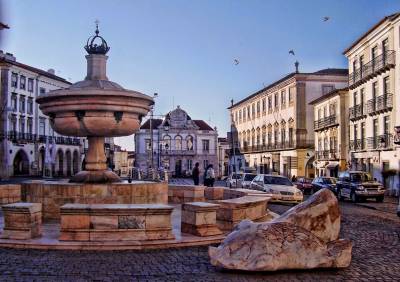